"For all their talk about Middle East peace, Obama and his advisors are not at all interested in achieving it." 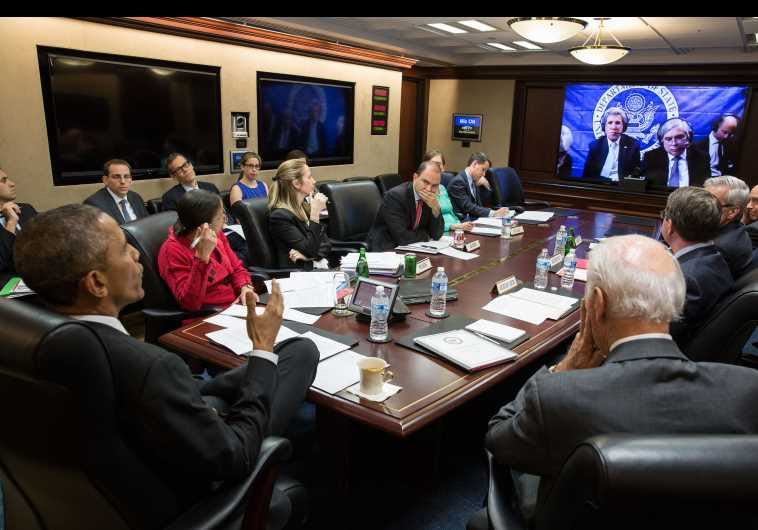 The US has striven to achive peaceable relations between the states of the Middle East for nearly 70 years. Yet today, US government is disparaging the burgeoning strategic ties between the Sunni Arab states and Israel.

In a briefing to a delegation of visiting Israeli diplomatic correspondents in Washington last week, a senior Obama administration official sneered that the only noticeable shift in Israel-Arab relations in recent years is that the current Egyptian government has been coordinating security issues “more closely” with Jerusalem than the previous one did.

“But we have yet to see that change materialize in the Gulf.”

If this is how the US views the state of Israel’s relations with the Arabs, then Israel should consider canceling its intelligence cooperation with the US. Because apparently, the Americans haven’t a clue what is happening in the Middle East.

First of all, to characterize the transformation of Israeli-Egyptian relations as a mere question of “more closely” coordinating on security issues is to vastly trivialize what has happened over the past two years.

Before then Egyptian defense minister Abdel Fattah el-Sisi overthrew the US-backed Muslim Brotherhood regime headed by Muhammad Morsi in July 2013, there was a growing sense that Morsi intended to vacate Egypt’s signature to the peace deal with Israel at the first opportunity. Just a month after Morsi ascended to power in January 2013, the Muslim Brotherhood began threatening to review Egypt’s continued commitment to the peace treaty.

The main reason Morsi did not cancel the peace deal with Israel was that Egypt was bankrupt. He needed US and international monetary support to enable his government to pay for imported grain to feed Egypt’s destitute population of 90 million.

During his year in power, Morsi used Hamas as the Brotherhood’s shock troops. He embraced Iran, inviting president Mahmoud Ahmadinejad to visit Cairo in February 2013.

If Morsi were still in power today, with its $150 billion in sanctions relief Iran would have been in a position to support Egypt’s economy. So it is possible that if Morsi were still president, he would have felt he had the financial security to walk away from the peace treaty.

In happy contrast, under Sisi, Israeli-Egyptian ties are closer than they have ever been. Just last week Egyptian diplomats told Al Ahram that Israel’s support was critical for building administration support for Sisi.

Israel is closely working with the Egyptians on defeating the growing threat of Islamic State, Hamas and other Islamic terrorist groups waging a bloody insurgency against the regime in Sinai.

Last summer, it was due to the close coordination between Sisi and Israel that the US failed to force Israel to accept Hamas’s cease-fire terms, as those were represented by the Islamist regimes of Qatar and Turkey.

In part due to Israel’s critical support for Sisi’s government, and in part owing to their opposition to Iran’s rise as a regional hegemon armed with nuclear weapons, Saudi Arabia, the UAE and Jordan have all joined Egypt in viewing Israel as a strategic partner and protector.

Last year Saudi Arabia together with the UAE and Jordan supported Israel and Egypt in opposing Hamas and its American, Turkish and Qatari defenders. Had it not been for this massive Arab support, it is very likely that Israel would have been forced to accept the US’s demands and grant Hamas control over Gaza’s international borders.

In June, as negotiations between the US and the other five powers and Iran were moving toward an agreement, the Council on Foreign Relations in New York hosted a meeting between then incoming Foreign Ministry director general Dore Gold and retired Saudi General Anwar Eshki, a former advisor to the Saudi ambassador to the US. The two revealed that over the previous 18 months, they had conducted five secret meetings to discuss Iran.

Although President Barack Obama harangued Israel in his speech at American University last Wednesday, claiming that the Israeli government is the only government that has publicly opposed his nuclear deal with the Iranians, Monday US congressmen now shuttling between Egypt and Israel told Israeli reporters that Egypt opposes the nuclear deal.

As for the Gulf states, according to the US media, last week they told visiting US Secretary of State John Kerry that they support the nuclear deal.

Kerry addressed his counterparts in the Gulf Cooperation Council.

But the fact is that the only foreign minister who expressed such support was Qatari Foreign Minister Khaled al-Attiyah. To be sure, Attiyah was charged to speak for all of his counterparts because Qatar holds the GCC’s rotating chairmanship. But given that Qatar has staked out a pro-Iranian foreign policy in stark contrast to its neighbors and GCC partners, Attiyah’s statement is impossible to take seriously without the corroboration of his colleagues.

As for Qatar’s statement of support, Qatar has worked for years to cultivate good relations with Iran. It might have been expected therefore that Attiyah’s endorsement of the deal would have been enthusiastic. But it was lukewarm at best.

In Attiyah’s words, Kerry promised that the deal would place Iran’s nuclear sites under continuous inspections. “Consequently,” he explained, “the GCC countries have welcomed on this basis what has been displayed and what has been talked about by His Excellency Mr. Kerry.”

The problem of course is that Kerry wasn’t telling the truth. And the Arabs knew he was lying. The deal does not submit Iran’s nuclear sites to a rigorous inspection regime. And the GCC, including Qatar, opposes it.

In his briefing with Israeli reporters, the high-level US official rejected the importance of the détente between Israel and its Arab neighbors because he claimed the Arabs have not changed their position regarding their view of a final peace deal between Israel and the Palestinians.

But this is also nonsense. To be sure, the official position of the Saudis and the UAE is still the so-called Arab peace initiative from 2002 which stipulates that the Arabs will only normalize relations with Israel after it has ceded Jerusalem, Judea, Samaria and the Golan and allowed millions of foreign-born Arabs to freely immigrate to the shrunken Jewish state. In other words, their official position is that they will only have normal relations with Israel after Israel destroys itself.

The senior official told the Israeli reporters that in order to show that “their primary security concern is Iran,” then as far as the Arabs are concerned, “resolving some of the other issues in the region, including the Palestinian issue should be in their interest. We would like to see them more invested in moving the process forward.”

In the real world, there is no peace process. And the Palestinian factions are fighting over who gets to have better relations with Iran. Monday we learned that PA leader Mahmoud Abbas wishes to visit Iran in the coming months in the hopes of getting the money that until recently was enjoyed by his Hamas rivals.

Hamas for its part is desperate to show Tehran that it remains a loyal client. So today, no Palestinian faction shares the joint Israeli-Saudi-Egyptian interest in preventing Iran from becoming a nuclear armed regional hegemon.

The administration showed its hand in that briefing with the Israeli reporters last week. For all their talk about Middle East peace, Obama and his advisors are not at all interested in achieving it or of noticing when it has been achieved.

Like in math, depending which axioms you pick, the resulting axiomatic systems will differ. You either get Euclidean or non-Euclidean geometry.