Another Iranian nuclear scientist has been assassinated. Do people understand what is going on?   I do not think so.  I bet that less than 20 percent of Israelis and even less Americans have ever heard of the Mahdi and fewer still understand why the death of the  mutually assured destruction doctrine has such profound implications for us all.  This blog will assemble articles which very rarely appear in the mainstream media.  It will be updated only when something referring to MAD and Iran is published, i.e. it will not be updated often.

" During the Cold War, both the Soviet Union and the had nuclear weapons but both knew that the other was very unlikely to use them. Because of what was known at the time as MAD—mutually assured destruction. MAD meant that each side knew that if it used a nuclear weapon the other would retaliate and both sides would be devastated. And that's why the whole time during the Cold War, even at the worst times, there was not much danger of anyone using a nuclear weapon," says Mr. Lewis.
But the mullahs "are religious fanatics with an apocalyptic mindset. In Islam, as in Christianity and Judaism, there is an end-of-times scenario—and they think it's beginning or has already begun." So "mutually assured destruction is not a deterrent—it's an inducement."

Reza Kahlili
Reza Kahlili is the pseudonym of a former Iranian Revolutionary Guard member who worked undercover as a CIA agent for several years in the ‘80s and ‘90s.

Once they get the nuclear bomb, and they have the nuclear capability, and anybody can determine this because they are running multiple convert operations, parallel projects of nuclear bomb and missile delivery systems. It is a parallel project for one purpose, and I can argue both sides of the coin, but my belief is that .this is a messianic regime,  there should be no doubts, they will commit the most horrendous suicide bombing in human history. They will attack , European capitals and region at the same time, then they will hide in a bunker waiting for Mahdi to get out of that well, ride the white horse, draw that sword and kill the rest of the nonbelievers.
Now to al lot of people here in the West think this is crazy talk. But if you give it 1 percent chance, are you willing to risk it?  The other side of the coin is that, let’s say that they have a rational mind, let’s say that they are interested in survival, let’s say they just want to use it as a source to protect their government, to become untouchable. The proliferation is going to become a disaster, and I was at the front row seats of Mohsen Razaei when they brought out the new strategy which was numbers meaning a thousand small groups of small boats is going to cause a threat. A thousand suitcase bombs spread around Europe and the is going to pose a threat. You are not going to get a handle on the proliferation. They are going to be untouchable. They are going to pass it on to Hezbollah, to , to . It is going to become a nightmare. Or more so because they are sitting on more than 50 percent of the world’s energy, gas an oil. The stability of the flow of energy is essential for global economy and our survival. Even if they were the most rational people, which they are not, no one, no one should have access to the nuclear bomb in the , unless there is a replacement for oil. And that is if you’ve got a really cold heart and you do not give a damn about the Iranian people.
Harold Rhode


Harold Rhode is a specialist on the Middle East who worked at the Office of Net Assessment, an in-house think tank for the Pentagon. 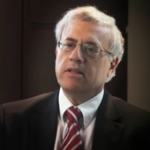 You describe a tradition of creative and critical thinking in Shi’ism. How then has been overtaken by such a cult of irrationality?

The ones who are there now, Khomeini hated. On this we’ve gone from bad to worse. Classic Shi’ism says that the 12th imam is the messiah. He disappeared in 873 CE and he will return. Until he returns, all political rule is illegitimate. The role, therefore, of the senior Shi’ite establishment is to worry about the spiritual needs of the flock. All political rule is illegitimate until the mahdi returns. There is a very minor tradition, I don’t know, maybe in 2 percent of Shi’ism, that holds religious leaders can rule before the return of the mahdi. Khomeini, who was originally a quietist, basically took over that tradition and brought this rule to which is totally antithetical to the overwhelming majority of Shi’ite thought... To actively get involved in politics is a minor, minor tradition in Shi’ism. You can help out but you don’t rule...

Simply more and more of the crazies took over. There were a group of people called the Hojjatieh Society, and they’re the ones who are running the country now, that Khomeini was very scared of. Because their answer was not only could the clerics rule, but they believed you could provoke a conflagration, and when the conflagration takes place, you can force the mahdi to return. He will save the whole world and all the world will be Shi’ite and everything will be good.

We had a doctrine with the Soviets of mutually assured destruction; that does not work with these people. These people, some of them have claimed that they had talked with the imam, and [Mahmoud] Ahmadinejad has said that he has seen the imam. This is stuff that Khomeini thought was wild and dangerous. These are the people running the country now.
If gets the bomb, can we stop worrying and learn to live with it?

The people running the country are the crazies and they believe that if they can bring about a conflagration that will bring them the mahdi.

So you think that if they have the bomb they will use it?

There are two theories on that, and again I’m not a nuclear guy, I’m a culture guy. One is that they would use it. How they would use it and how they would try is beyond me. I would hope that both and the have some ways of of figuring this out and neutralizing this. The other is that just by having it that would make all of the Gulf countries kowtow to them.
John Bolton


John Bolton is an  American lawyer and diplomat  who was the United States Ambassador to the United Nations from August 1, 2005 – December 9, 2006

Facile analogies to Cold War deterrence rest on the dubious, unproven belief that 's nuclear calculus will approximate the 's. 's theocratic regime and the high value placed on life in the hereafter makes this an exceedingly dangerous assumption.


Menashe Amir
Menashe Amir is a long time Persian Language broadcaster on the Israel Radio International. He is also a leading Iranian expert in Israel and a chief editor of the Israel Foreign Ministry's Persian web-site.

Iran's current rulers, he goes on, "are crazy people. Crazy people who have missiles with . and . and . ranges, and planning for . If they get a nuclear bomb tomorrow, they'll be able to threaten , and . Eventually, .

"They say that they lost 500,000 people in the eight-year war with (and other sources suggest the number was twice that high), but note that millions more were born in the same period. And that, in any case, ‘all is permissible in the cause of Islam.' They believe that the messiah's arrival is imminent, and that he will turn the whole world Islamic.
Mahmoud Ahmadinejad
President of Iran

"The world is in continuous change and evolution. The promised destiny for the mankind is the establishment of the humane pure life. Will come a time when justice will prevail across the globe and every single human being will enjoy respect and dignity. That will be the time when the Mankind's path to moral and spiritual perfectness will be opened and his journey to God and the manifestation of the God's Divine Names will come true. The mankind should excel to represent the God's "knowledge and wisdom", His "compassion and benevolence", His "justice and fairness", His "power and art", and His "kindness and forgiveness". These will all come true under the rule of the Perfect Man, the last Divine Source on earth, Hazrat Mahdi (Peace be upon him); an offspring of the Prophet of Islam, who will re-emerge, and Jesus Christ (Peace be upon him) and other noble men will accompany him in the accomplishment of this, grand universal mission. And this is the belief in Entezar (Awaiting patiently for the Imam to return). Waiting with patience for the rule of goodness and the governance of the Best which is a universal human notion and which is a source of nations' hope for the betterment of the world.

"They will come, and with the help of righteous people and true believers will materialize the man's long-standing desires for freedom, perfectness, maturity, security and tranquility, peace and beauty. They will come to put an end to war and aggression and present the entire knowledge as well as spirituality and friendship to the whole world.

"Yes; Indeed, the bright future for the mankind will come."


Who is Mahmoud Ahmadinejad?

Genesis of Shi’a Islam
Iran Leaders: The Coming is Upon Us – Israel Shall be Destroyed! (Watch the Video)
MAD in the 21st Century


The last time the MAD doctrine almost did not work
Fourteen Days in October: The Cuban Missile Crisis

Posted by Mladen Andrijasevic at 8:21 AM