From Gates of Vienna 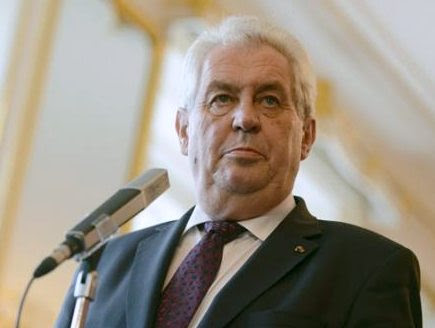 Miloš Zeman, the president of Czech Republic, gave the following speech last Monday at a reception to celebrate Israel’s Independence Day. Many thanks to Gemini for the translation from the official text posted at the Czech government’s website.

Speech by the president of the Czech Republic at the reception held to celebrate Israel’s Independence Day
May 26, 2014
Ladies and gentlemen,
Let me thank you for the invitation to celebrate Israel’s Independence Day. There are dozens of days of independence being celebrated every year in the Czech Republic. Some I may attend, others I cannot. There is one I can never miss, however: it’s the Israeli Independence Day.
There are states with whom we share the same values, such as the political horizon of free elections or a free market economy. However, no one threatens these states with wiping them off the map. No one fires at their border towns; no one wishes that their citizens would leave their country. There is a term, political correctness. This term I consider to be a euphemism for political cowardice. Therefore, let me not be cowardly.
It is necessary to clearly name the enemy of human civilisation. It is international terrorism linked to religious fundamentalism and religious hatred. As we may have noticed after 11th of September, this fanaticism has not been focused on one state exclusively. Muslim fanatics recently kidnapped 200 young Christian girls in Nigeria. There was a hideous assassination in the flower of Europe in the heart of European Union in a Jewish museum in Brussels. I will not let myself being calmed down by the declaration that there are only tiny fringe groups behind it. On the contrary, I am convinced that this xenophobia, and let’s call it racism or anti-Semitism, emerges from the very essence of the ideology these groups subscribe to.

So let me quote one of their sacred texts to support this statement: “A tree says, there is a Jew behind me, come and kill him. A stone says, there is a Jew behind me, come and kill him.” I would criticize those calling for the killing of Arabs, but I do not know of any movement calling for mass murdering of Arabs. However, I know of one anti-civilisation movement calling for the mass murder of Jews.
After all, one of the paragraphs of the statutes of Hamas says: “Kill every Jew you see.” Do we really want to pretend that this is an extreme viewpoint? Do we really want to be politically correct and say that everyone is nice and only a small group of extremists and fundamentalists is committing such crimes?
Michel de Montaigne, one of my favourite essayists, once wrote: “It is gruesome to assume that it must be good that comes after evil. A different evil may come.” It started with the Arab Spring which turned into an Arab winter, and a fight against secular dictatorships turned into fights led by Al-Qaeda. Let us throw away political correctness and call things by their true names. Yes, we have friends in the world, friends with whom we show solidarity. This solidarity costs us nothing, because these friends are not put into danger by anyone.
The real meaning of solidarity is a solidarity with a friend who is in a trouble and in danger, and this is why I am here.
— Miloš Zeman, president of Czech republic, Hilton Hotel, 26th of May 2014

The  Organization of Islamic Cooperation did not like Milos Zeman’s speech, but without quoting  from the "sacred text",  asked that he apologize:

The Secretary General of the Organization of Islamic Cooperation, Iyad Ameen Madani, expressed his disappointment at the reported statements made by the Czech President, Miloš Zeman, on 26 May 2014 at the Israeli Embassy in Prague that “Islamic ideology rather than individual groups of religious fundamentalists was behind violent actions similar to the gun attack at the Jewish Museum in Brussels.”

"I believe that this xenophobia and this racism or anti-Semitism stem from the very nature of the ideology on which these fanatical groups rely, I know about an anti-civilization movement that calls for the massive murdering of Jews," the Czech President was quoted to say.

Mr. Madani stated that the Czech President's recent statements on Islam are in line with the previous statements the President made in the past, where he linked "believers in the Quran with anti-Semitic and racist Nazis"; and that "the enemy is anti civilization spreading from North Africa to Indonesia, where two billion people live”.

Such statements, said Mr. Madani, not only shows President Zeman's lack of knowledge and misunderstanding of Islam, but also ignores the historical facts that anti-Semitism and Nazism are a European phenomena through and through. They have no roots in Islam, neither as a religion nor as a history or civilization. The Holocaust did not take place in the area from North Africa to Indonesia, Madani said.

President Zeman's statements are nothing more than misinformed stereotyping and Islamophopic, the Secretary General added.

Madani stressed that such statements, issued even before the identification of culprits and motives, are not only irresponsible but also feed the existing stereotyping, incitement to hatred, discrimination and violence against Muslims based on their religion. It also runs contrary to the ongoing global efforts to strengthen dialogue among civilizations, cultures and religions to promote multiculturalism, understanding, acceptance and peace.

The Secretary General reiterated that Islam is a religion of peace and tolerance and that terrorism should not be equated to any race or religion; a stance upheld by all major UN texts on the subject of countering terrorism. He added that the OIC countries share a profound respect for all religions and condemn any message of hatred and intolerance.

It is only appropriate that President Milōs Zeman apologizes to the millions of Muslims worldwide for his deeply offensive and hateful anti Islam statements.

Mr. Madani urged the international community to take strong and collective measures to promote peace, harmony and tolerant co-habitation among peoples of diverse religious faiths, beliefs, cultural and ethnic backgrounds. He also called upon all political, secular or religious leaders to join hands and strengthen their efforts in promoting dialogue and mutual understanding, which will prove that “what joins us together across religions and regions is far greater than what separates us”.

The translated excerpt from idNES.cz  from the Gates of Vienna
:
President Miloš Zeman is not going to apologise for his statements in which he linked Islamic ideology with violence. His words were conveyed by his spokesperson Jiří Ovčáček: “President Zeman definitely does not intend to apologise. For the president would consider it blasphemy to apologise for the quotation of a sacred Islamic text.”

Narrated Abu Huraira: Allah's Apostle said, "The Hour will not be established until you fight with the Jews, and the stone behind which a Jew will be hiding will say. "O Muslim! There is a Jew hiding behind me, so kill him

Article 7 of the Hamas Charter reads:

The Day of Judgement will not come about until Moslems fight the Jews (killing the Jews), when the Jew will hide behind stones and trees. The stones and trees will say O Moslems, O Abdulla, there is a Jew behind me, come and kill him.
Posted by Mladen Andrijasevic at 11:43 AM