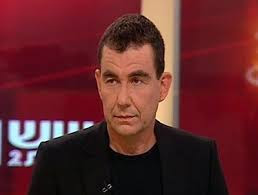 In his latest article in THE COUNTDOWN series titled  Iran is here, Ari Shavit writes: “There are no good people and bad people in the face of Natanz, only those who see and those who are blind”.

Ari Shavit  is among the blind. He is among the blind because of the thirteen people whom he interviewed NONE were scholars of  Islam.  When PM Netanyahu in his speech to the UN General Assembly  quoted   Bernard Lewis "He said that for the Ayatollahs of Iran, mutually assured destruction is not a deterrent, it’s an inducement"   how many Israelis  knew what he was talking about?  Very few.  Very few because Ari Shavt failed to interview the only people who really know the magnitude of the Iranian threat.

Ari Shavit continues..
“He [Netyanyahu] did not make the required political moves to accord his government domestic legitimacy. Even as he engaged in brinkmanship vis-a-vis , he also engaged in brinkmanship vis-a-vis the , the Israeli security establishment and local public opinion. Suddenly, therefore, the tables were turned. Instead of being perceived as an evil power undermining the world order, began to be perceived as a crazy state threatening world peace.”
And why does the world perceive as a crazy state threatening world peace?  Precisely because the world press, including Ari Shavit, refused to discuss  Shia eschatology, the Mahdi and the Twelvers, and refused to interview scholars  who would have informed them.
Ari Shavit writes.”  Instead of the and working together against , the and began to work against each other."
What Ari Shavit omits is to explain how is Nathayhu supposed to trust the Obama administration which supports the Muslim Brotherhood, the most anti-Semitic and anti American organization?   Here is former federal prosecutor  Andrew McCarthy on the Obama administration  and the Muslim brotherhood.
Ari Shavit should  pack his bags and fly to and interview Bernard Lewis instead of  complaining how everyone is blind.

Something went terribly wrong with the Netanyahu strategy of blocking Iranian nuclearization. The threat is as daunting as ever, but stopping it has become increasingly complicated

Posted by Mladen Andrijasevic at 2:02 AM

Joining me now to the reaction to the prime minister’s Netanyahu’s address  -- two men with extensive foreign policy and military experience -  John Bolton, who of course is the former US ambassador to the United Nations and a Fox News contributor and general Jack Keane who's a retired four star general, former vice chief of staff of the army and a Fox News military analyst.
You have some interesting thoughts on this.  Number one, general, you were saying a shift in the timing, in terms of what the prime minister views as the ultimate date on 's nuclear weapons program.
Well, the prime minister consistently has been saying we are we're out of time and a number of months ago he said we have six to eight months left and I think now pushing that time line back to the spring or summer of next year is probably a little closer to where our current administration has it, I think our administration is actually beyond that time frame, but he has clearly moved closer to where this administration is that we do have more time.
And also you mentioned we, saw the prop that he had, you know,  he actually busted up the prop,  with the bomb and the fuse  which does make you pay attention, I mean,  some of us will think it's a little hokey,  but it makes you pay attention, all three of us started looking.
And seems to be drawing the Red Line at they can't get beyond 90% uranium enrichment?

Yeah, I was surprised by that. I think if I was drawing that red line I’d  draw it to when they begin to move to highly enriched uranium for weaponization, in other words, when you go from 20% to 90% you begin to move towards that and that I think gives you that weapon and why wait until they’ve  completed it ,is where he's drawing that red line, if I understand what he is saying -- I think the use of that graphic is brilliant,  to get people to understand  what's really taken places here, in such a complicated sophisticated subject, he's broken it  down I think so that any person can understand.
It reminds me of Saturday morning cartoons, that's how the bombs would look with a little fuse- anyone can get what he's trying to show us.

Ambassador Bolton -- your thoughts on this subject

Well I thought he made one very important point that people don't understand and that is that the economic sanctions may have caused pain economically but they have not stopped or  materially impeded the nuclear weapons program.
So, you can have sanctions till the cows come home. is the most heavily sanctioned country on Earth, bar none, and it is already exploded two nuclear devices.
And I think that's an important argument to make because people are prone to say just why don’t we just toughen the sanctions up a little bit.
Under his timeline, under the Netanyahu timeline the sanctions are not gonna bring Iran to its knees before they have crossed his red line, so I thought that point was important to make and I think people need to understand that especially if military action follows.
Where I think he made a mistake was on the Red Line I think I agree with Jack on that point. You know, the Security Council of the vaunted United Nations set a red line in 2006. It said stop all uranium enrichment activities.  And has blown right past that red line effectively with no consequences for its nuclear weapons program. So to me the very concept of a red line - it has dubious effect because the Iranians have seen previous red lines repeatedly ignored
We’ve seen in this country somewhat of a debate about what we should be doing with respect to 's nuclear program and we heard a lot of it during the Republican primary quite frankly. Ron Paul was saying what business is it of ours. If   wants to develop a nuclear weapon and that's its business and we have no right to tell them no.
When we were listening to the prime minister you knew at one point his speech he was going to get to a quote from Bernard Lewis, and he did and the quote was something the effect of - for the Ayatollahs mutually assured destruction is not a deterrent to getting nuclear weapons it's an inducement to getting and using them.
Right, if you prize life in the hereafter more than you prize life on Earth the threat of being destroyed isn't going to deter you -- one thing you can say about the Communists during Cold War days is they were atheists they knew they were only going around once in life and they weren't about to throw it way too quickly.
That's not a calculus that applies to Iran and that's why the entire notion that it would be bad if Iran got nuclear weapons but we could contain and deter a nuclear Iran is delusional, very dangerous and even if I'm completely wrong on that, it doesn't stop with Iran, as secretary of state Clinton herself has said Saudi Arabia, Egypt, Turkey and perhaps others will get nuclear weapons as well making an already volatile region even more dangerous.
General…
Yeah, I totally agree I think one of the great values of the speech was laying out the true threat of radical Islam and it not just threatens Israel, it threatens the world because of what their objectives are and we have a nation state of the espouses that as well and wants a nuclear weapon and a thirty year history here of terrorism killing us. I mean the last commander we had in Iraq believes that the Shiite militia, sponsored by the Iranians, trained by the Iranians in Iran,   given weapons by the Iranians, killed close to two thousand of our 4400 American  dead. Plus blew up two embassies plus blew up two barracks and then this nation takes on a nuclear weapon. I think his characterization of that threat and what that means not just of the region but to the world is absolutely clear. One of the best presentations I've seen on the subject

Thank you both so much. I appreciate you being here.
Posted by Mladen Andrijasevic at 6:54 AM