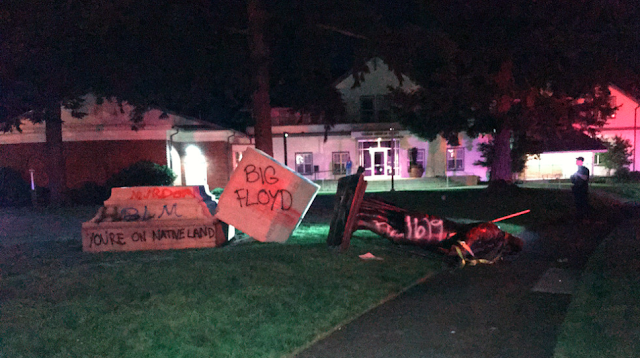 Protesters tore down the statue of George Washington at the German American Society in Northeast Portland late Thursday night. (KATU)

PORTLAND, Ore. — A group of people late Thursday night tore down a statue of George Washington that stood on the lawn of the German American Society in Northeast Portland.

Meanwhile, protesters elsewhere took a break from their nightly marching, but they still gathered at Jefferson High School.

The group is organized by Rose City Justice, which usually meets at Revolution Hall and marches somewhere across the city.

But on Thursday night they stayed at Jefferson and heard from numerous speakers about the Black Lives Matter movement.

And as they have done almost every night for three weeks, another group of a few hundred protesters gathered at the Justice Center downtown, which has been the site of the most clashes between police and protesters.


If this does not sound the alarm bells that something is terribly wrong with these protests, what will? When they bring down the statues of John Adams and Thomas Jefferson? Will Sally Hemings be the justification?

The whole situation reminds me of what Lenin said  to Bertrand Russell in 1920:  ‘Oh dear me no, we are not establishing peasant proprietorship, you see there are workers and some rich peasants and we stirred up the poor peasants against the rich peasants and these soon hanged them to the nearest tree . Ha, ha, ha, ha!’

Posted by Mladen Andrijasevic at 3:25 AM