Bolton: US won't attack Iran, but will green-light Israel to do it 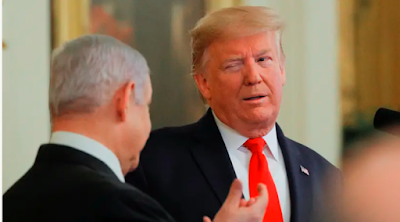 1) The US under President Donald Trump will not attack Iran’s nuclear weapons program preemptively;

2) Trump has green-lighted and would continue to green-light Israel to do so; and

3) none of Trump’s key advisers believe his “maximum pressure” policy will change Tehran’s behavior absent of a regime change (which only Bolton actively sought to do).

The truth is that a number of top US and Israeli security officials have been theorizing about these three points for some time.

But no one has ever reported what Trump’s mindset was on the issue behind closed doors, as Bolton has now done.

In a 2017 meeting in which he and Trump were discussing their critique of the 2015 Iran nuclear deal, Trump told him, “You tell Bibi [Netanyahu] that if he uses force, I will back him. I told him that, but you tell him again.”

The former national security adviser also recalls multiple instances where he was discussing the viability of America's deterrence of Iran with then-US military chief Joseph Dunford, Secretary of State Mike Pompeo and other top Trump officials.

Finally, Bolton gives an extensive narrative of what is mostly viewed as Trump’s botched response (or non-response) to Iran’s shooting down of a RQ-4A Global Hawk drone in June 2019.

What is clear in all of these passages is that despite having confidence in public – away from the cameras – Bolton, Dunford and Pompeo do not believe Iran will change its behavior simply by virtue of Trump’s “maximum pressure” campaign.

Another point that is clear is that they believed, in those behind the scenes talks, that Trump’s actions sent a message to the Islamic Republic that he would not be willing to preemptively strike its nuclear program.

Further, there is also no question that one reading of the Dunford-Bolton and Pompeo-Bolton passages is that none of these top aides believed Trump was willing to preemptively strike Tehran’s nuclear program.

They are concerned that Iran knew this and wanted to fool Iran into thinking that the president still might strike so as to deter the ayatollahs from deciding to break out to a nuclear weapon.

Together with Trump’s comments to Bolton in the other passage about Israel striking first, this reading seems very likely to be the correct one.

AT NO POINT in Bolton’s book is there any real mention of Trump talking of the US preemptively striking Iran’s nuclear program. There is frequent discussion, however, about how to respond with much more limited strikes on Iranian assets after Tehran shot down the extremely expensive US drone or used its proxies to attack US assets or allies.

But Trump always views, in very narrow terms, the actual use of force – as opposed to tweeting about using force –  and is extremely worried about not killing too many enemy soldiers, in order to avoid an escalation.

As Bolton describes it, Trump backed down from retaliating against three Iranian sites, following the Islamic Republic’s shooting down of the US drone, based on hearing unsubstantiated estimates of Iranian casualties which Bolton and Dunford said were gross overestimates.

Bolton’s message is that no matter how Trump sounds in public, behind the scenes he is looking for ways out of using force. Trump is nowhere near to having the stomach for preemptively striking Iran’s nuclear program. Bolton would have certainly supported such actions.

Some have argued that Trump’s daring order to kill Islamic Revolutionary Guard Corps’ Quds Force Chief Qasem Soleimani was a game changer that reset what the US president might be willing to do. After all, this was in January, a few months after Bolton had stepped down.

But Trump’s rush to declare an end to that January standoff with Iran; his decision not to retaliate after Tehran fired dozens of missiles at US bases in Iraq; and Bolton’s descriptions of his tenure say otherwise.

Rather, Bolton seems to make it clear that if Iran only quietly moves toward a nuclear bomb without killing any US soldiers and avoids publicly embarrassing Trump, he will not take action.

ALL OF THIS is mixed news for Israel.

Jerusalem is happy to have a green light from the US if there becomes a need for a preemptive strike on Iran’s nuclear program. But it would have also liked US participation in the strike and may be discouraged by top US officials’ lack of belief in their own “maximum pressure” campaign.

Another key passage which sheds light on whether Israel could pull off such a strike on its own is Bolton’s recounting of a meeting he had with Russian President Vladimir Putin.

“Israel, he said, could not conduct military action against Iran alone because it didn’t have the resources or capabilities, especially if the Arabs united behind Iran, which was preposterous,” Bolton wrote.
Bolton’s confidence that Israel does in fact have the resources and capabilities for such a strike is significant as it has been an open question for the last decade.

In January, The Jerusalem Post broke new ground on the question, noting new capabilities Israel had developed in the last few years without even having special “bunker buster” bombs for striking Iran’s underground Fordow facility.

A scenario raised by the Post was whether: 1) a 5,000-pound or similar weapon by Lockheed Martin; 2) multiple coordinated uses of that bomb, or; 3) a rampage missile or spice bomb (bombs Israel has but which are smaller than the 21,000-30,000 pound US bombs), would be enough to destroy Fordow.

Although top current and former officials that spoke to the Post on the issue mostly implied that Israel still does not possess the capability to strike Fordow on its own, some surprisingly said the opposite.

Bolton’s vote of confidence with the information he had in October 2018 suggests that Israel’s capabilities may be sufficient for a solo strike.

Posted by Mladen Andrijasevic at 11:39 PM