Black Lives Matter vs Winston Churchill - whose side are you on? 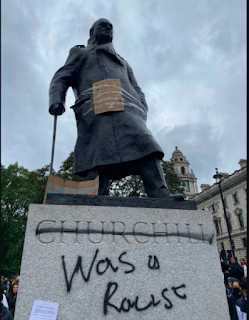 I just wrote a letter to the Jerusalem Post regarding:   Open letter calls on Jewish organizations to endorse Black Lives Matter.

An open letter organized by three Jewish activists is calling on the Jewish community to take a number of actions, including endorsing Black Lives Matter. (June 13).  Published Friday, the letter has been signed by 52 people affiliated with Jewish organizations.

Yet a Black Lives Matter protester vandalized the statue of Winston Churchill in Parliament Square. He explained his motives:  “I tagged up the statue of Churchill because he's a confirmed racist. He fought the Nazis to protect the Commonwealth from invasion - he didn't do it for black people or for people of colour or for people of anything. He did it sheerly for colonialism. People will be angry - but I'm angry that for many years we have been oppressed”

In his December 31, 1999 column in the Washington Post, Charles Krauthammer wrote:

“Person of the Century? Time magazine offered Albert Einstein, an interesting and solid choice. Unfortunately, it is wrong. The only possible answer is Winston Churchill.

Why? Because only Churchill carries that absolutely required criterion: indispensability. Without Churchill the world today would be unrecognizable — dark, impoverished, tortured.

Take away Churchill in 1940, on the other hand, and Britain would have settled with Hitler — or worse. Nazism would have prevailed. Hitler would have achieved what no other tyrant, not even Napoleon, had ever achieved: mastery of Europe. Civilization would have descended into a darkness the likes of which it had never known.”

Jewish organizations are willing to endorse Black Lives Matter whose members desecrate the statue of the man who saved civilization from the “darkness the likes of which it had never known”.  This is shameful!  They have forgotten our collective history.

Update, June 15, 2015:  Published as a Letter to the Editor in the Jerusalem Post

Posted by Mladen Andrijasevic at 3:11 AM