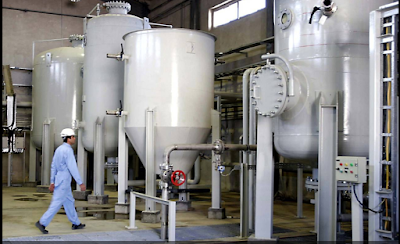 Inside the Arak heavy-water production facility in central Iran. Last week, the head of the U.N. atomic agency overseeing the nuclear deal called out Iran for exceeding the heavy-water cap for a second time this year. PHOTO: REUTERS

BRUSSELS—The U.S. and its Western allies are pressing Iran to take steps to sharply cut the amount of radioactive material it holds in a bid to shore up last year’s nuclear deal and discourage the incoming Trump administration from abandoning it, Western officials said.

The discussions about reducing Iran’s stockpile of enriched uranium started months ago, officials said, and are among a number of measures the Obama administration has been examining to fortify the accord in its final months in office. But the initiative has taken on new urgency since the election of President-elect Donald Trumpcreated fresh uncertainty around the deal.

If agreed upon, the plan could reduce the odds of a sudden flashpoint between the U.S. and Iran over Tehran’s implementation of the deal once Mr. Trump takes office, Western officials say, by reducing its enriched-uranium stockpile well below the cap agreed to in the 2015 accord.

Officials say the plan would also lengthen, for a while, Iran’s so-called breakout time—the amount of time it would take the country to accumulate enough material for one nuclear weapon were it to quit or violate the deal—though it is unclear by how much. The constraints of the nuclear agreement are currently set up to ensure it would take Iran at least a year to produce the ingredients for a nuclear weapon.

Neither the Trump transition team nor Iranian officials immediately responded to requests for comment on the initiative.

While on the campaign trail, Mr. Trump vowed to scrap and, alternately, renegotiate the deal, and his picks to his national security team so far suggest his administration will take a hard line with Tehran. On Wednesday, Iran’s Supreme Leader Ayatollah Ali Khamenei threatened a response if the U.S. extended Iranian sanctions—as House lawmakers this week voted to do—for another decade.

Western officials, though, say Iranian officials have engaged in serious discussions about the new plan but haven’t so far committed to it. In the past, Iran has proven sensitive about moves that would curtail its rights to enrich uranium under the accord. Having that right was a demand Iran—which has always denied any intent to develop nuclear weapons—made a priority in the nuclear-deal negotiations. Nonetheless, Iran has sent abroad or blended into natural uranium thousands of kilograms of enriched uranium since the July 2015 accord.

That agreement sought, among other things, to ensure that Iran couldn’t speedily accrue enough of key ingredients, such as enriched uranium and plutonium, to build a nuclear weapon.

Under the deal with the U.S. and five other governments, including Russia, Iran agreed to cap its stockpile of enriched uranium at 300 kilograms (661 pounds) for the next 15 years. The agreement also set a cap of 130 metric tons (143.3 U.S. tons) on Iran’s stockpile of heavy water, a material that can be used to cool uranium in a process to produce plutonium.

Last week, the head of the United Nations atomic agency overseeing the Iranian nuclear agreement called out Iran for exceeding the heavy-water cap for a second time this year. International Atomic Energy Agency Director General Yukiya Amano warned that Iran could undermine confidence in the implementation of the deal if Tehran crossed key limits again.

Iran reacted swiftly and sent 11 tons of heavy water to Oman early this week, likely putting Iran below the 130-metric-ton limit for months to come, people familiar with the situation said.

The plan that the U.S. and its partners are currently discussing with Iran would take Tehran’s stockpile far from the 300-kilogram limit on enriched uranium, Western officials said, ensuring that it wouldn’t exceed the cap for some time.

When the nuclear deal was closed, Iran had an estimated 100 kilograms of enriched uranium stuck in the pipes and machinery at its currently mothballed enriched uranium facility in Isfahan in central Iran.

People familiar with the discussions, which have taken place among Iranian, U.S. and European nuclear experts, say that if an agreement is reached, Iran could, in a matter of a few weeks to a couple of months, clean out the facility and the pipes and machinery in a way which degrades the uranium so that it isn’t usable for potential future use in a weapon.

Officials say there are various ways that could be done without dismantling the facility including, for example, flushing the pipes with chemicals to create a liquid waste that would be very hard to turn back into powder form for enriching into weapons-grade uranium.

“The idea is to render material that is already incredibly difficult to recover unrecoverable,” said one Western official.

Some nuclear experts have complained that neither the IAEA, Iran, the U.S. nor the EU, which helps oversee the deal’s implementation, have clearly defined what they count as “unrecoverable” material—uranium that is genuinely impossible to separate out and redeploy.

They argue that some uranium may have been exempted from the cap over the past year, which, while time-consuming and difficult, isn’t impossible to reconstitute into more dangerous forms of enriched uranium.

Officials say that in the new political context, given the uncertainties over the nuclear deal, action by Iran to ensure it significantly reduces its current enriched uranium stockpile, would be a clear win-win.

“It is in everyone’s interest that Iran continues to remain under the limits set in the JCPOA,” said a senior U.S. administration official, using the acronym for the agreement.

People familiar with Iran’s actions say Iran has also run depleted uranium at other facilities to slow its production of enriched uranium. Others say Iran may have deliberately slowed production of heavy water by keeping its two production units at the nuclear site of Arak shut down for longer than technically necessary, although there is no hard evidence for that.

The enriched-uranium initiative is one of several by the U.S. administration to bolster the agreement before President Barack Obama leaves office. The Wall Street Journal reported last week that the administration was also considering steps to provide licenses for more American businesses to enter the Iranian market and the lifting of additional U.S. sanctions.

Posted by Mladen Andrijasevic at 12:01 AM