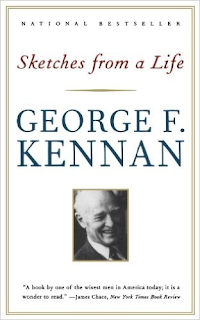 I had been reading George F. Kennan’s Sketches from a Life the last few months, not more than ten pages at a time, marking in pencil paragraphs that I especially liked, or reading them aloud to my wife.  Beautifully written, yet at times painful since he often touches on the transitoriness of human existence and that is not easy to confront.

In this entry from December 9, 1987, he describes the recognition he received from an unexpected source – then Soviet leader Mikhail Sergeyevich Gorbachev:

Remembering my wife’s admonishments not to stand uncomfortably in the background as I usually do in such occasions but to insist on meeting the guest of honor and adding my particular set of banalities to the others he was condemned to endure, I decided to make the effort. So I pushed through the crowd and eventually squeezed myself into the small circle of photographers, journalists and other pushy guests surrounding the distinguished visitor. The latter, whom I was meeting for the first time, appeared to recognize me, and amazed me by throwing out his arms and treating me to what has now become the now standard statesman’s embrace. Then, still holding on my elbows, he looked me seriously in the eye and said: "Mr. Kennan. We in our country believe that a man may be the friend of another country and remain, at the same time, a loyal and devoted citizen of his own; and that is the way we view you."

My ears failed me badly during Gorbachev’s long talk, and I amused myself by fidgeting with the earphones and trying to figure out which was harder to catch: the speaker’s Russian or the plodding artificialities of the simultaneous translation. But actually, I could not concentrate on what he was saying. His words to me still rang in my ears. And as I reflected on them, the whole sixty years of my involvement with (which included, at one point, being banned from Russia  as an “enemy of the Soviet people”) revolved before the mind’s eye; and I could think of no better conclusion to this entire chapter of activity -  at least none from the Soviet side  - than this extraordinarily gracious and tactful statement, worthy, when you think of it, of the finest standards of royal courtesy. I reflected that if you cannot have this sort of recognition from your own government to ring down your involvement in such a relationship, it is nice to have it at least from the one-time adversary.
Posted by Mladen Andrijasevic at 6:45 AM