Watch what is happening on Israel’s streets. Listen to the rants from the imams, reporters, and Palestinian leaders. 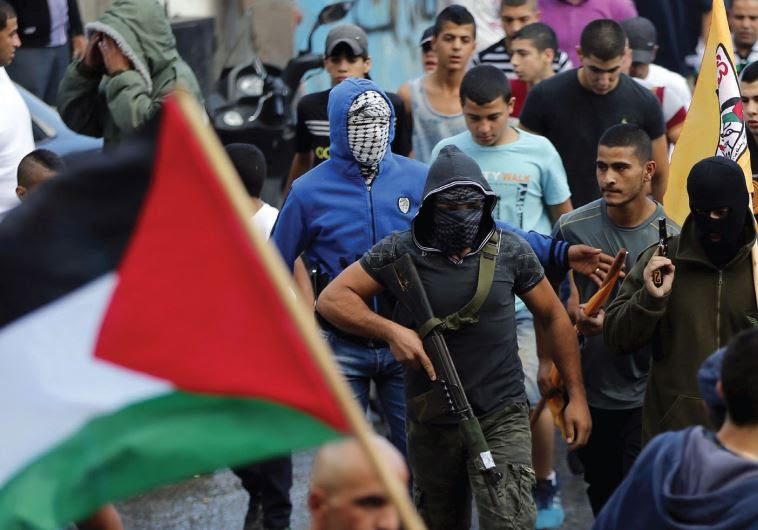 Palestinian gunmen in Shuafat carry weapons during a funeral march for a Palestinian terrorist, shot dead by police after stabbing two Israelis in Jerusalem’s Old City

When I am on the speaker’s circuit, I often upset right-wingers by saying that my Zionism, meaning my Jewish nationalism, helps me respect Palestinian nationalism. Just as I resent others who try redefining my nationalism for me – or delegitimize it – I won’t criticize others’ national consciousness or narrative. As these ardent Zionists squirm, students often react visibly to that statement, appreciating the nuance, enjoying the intellectual surprise, given that in the polarized, all-or-nothing demagoguery that passes for discourse in universities today they expect a Zionist activist like me to dismiss Palestinian nationalism.

Of course, the Palestinian national movement’s legitimacy doesn’t immunize it from criticism. Like any form of nationalism, it can tap the people’s potential, or unleash the people’s demons. Watching, experiencing, mourning the recent outrages, the Palestinian movement has turned monstrous – yet again.

Watch what is happening on Israel’s streets. Listen to the rants from the imams, reporters, and Palestinian leaders.

Then see why the word “monstrous” does not apply to all Palestinians, but fits the mainstream of their movement now.

This wave of violence, in which kids as young as 13 are riled up in old-fashioned ways through religious sermons and through new-fangled ways on social media, is ugly – and their crimes are extremely frightful, hideous.

Slashing a 13-year-old boy bicycling around his neighborhood, forcing him to fight for his life when he should be preparing for his bar mitzva is despicable, as is killing a 51-year-old and a 78-year-old on a bus, running over a rabbi, ambushing a young couple with their four children in a car, and on and on and on.

If the crimes were not shocking enough, the justifications for them, the celebrations of them, the lies about them are even more cruel, revolting, outrageous. After a terrorist attacked the Beersheba bus station, Mahmoud Zahar, a Hamas leader in Gaza said of the murderer: “If he had weapons, he and some of his friends would have been able to liberate the entire area of Beersheba.”

Really? What kind of leader stirs his followers with such irresponsible idiocy? What kind of people call such a fool their leader? Of course, the “moderate” Mahmoud Abbas is equally delusional, now rivaling his Hamas enemies in the rabble- rousing. His most recent outrage (when this article appears in print, more will have no doubt followed) was claiming that the 13-year-old Palestinian who stabbed the 13-year-old in Pisgat Ze’ev was innocent and dead, when he was guilty and alive. Abbas accused Israel of killing Ahmed Manasra in a “cold-blooded execution.”

When Ahmed was pictured resting comfortably having been treated by Israel’s angels of mercy in Hadassah Hospital – the official transcript of Abbas’ speech changed from “execution” to “shooting in cold blood” – although the young terrorist was not “shot,” he was hit by a car whose driver tried stopping him.

On one hand, some perspective: even on the worst days, the hard-hit city of Jerusalem has endured three or four terrorist crimes a day. None is too many, but Chicago is still a more dangerous city. The “monstrous” immensity of Palestinian terrorism has to do with how large it looms in Palestinian society, how central it is to Palestinian hopes, and, how broadly the fear spreads over Israel – and over tourists who should visit now more than ever.

4. Deviating grotesquely from the natural or normal form or type.

Raising your children to stab other children, encouraging your people to shoot other people, celebrating death and suffering of others, is indeed deviant, unnatural, abnormal. All those who call for a state of Palestine should wonder about the day after. What would a state look like with people like that in charge? Why doesn’t the chaos in Gaza, in Syria, in Iraq, inhibit any American policymaker demanding a Palestinian state? Do we need another Middle East volcano? What are these people thinking? Unfortunately ours is a monstrous era, “deviating grotesquely from the natural or normal form or type.”

I know it became a cliché, but Edmund Burke’s words still resonate: “The only thing necessary for the triumph of evil is for good men to do nothing.”

Forty years ago, on November 10, 1975, a proud, courageous American diplomat, Daniel Patrick Moynihan, saw an evil lie spreading at the UN and refused to do nothing. When the Soviets and the Palestinians propagated what Moynihan later called the “Big Red Lie” that one form of nationalism, Jewish nationalism, i.e.

Zionism, was a “form of racism,” he confronted the entire United Nations for embracing this monstrous lie.

Accused of picking a fight over the Zionism-is-racism resolution, he replied, “Damned right we did!” Four decades later, we need more Moynihans, we need more American leaders to slay the monsters, to express their outrage. Instead we have an administration filled with men and women doing nothing against these grotesqueries.

The writer is the author of The Age of Clinton: America in the 1990s which was just published by Thomas Dunne Books of St. Martin’s Press. A professor of history at McGill University this is his eleventh book. Follow on Twitter @ GilTroy www.giltroy.com
Posted by Mladen Andrijasevic at 11:48 AM