Israeli politicians and Groucho Marx: “Those are my principles, and if you don’t like them... well, I have others.” 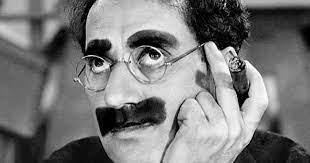 Regarding “Sa’ar, Bennett’s Arab vetoes may give PM first mandate” (March 30), even Blue and White leader Benny Gantz does not see anything wrong with the Islamic parties being in the coalition?
“He called on Sa’ar and Bennett not to rule out a coalition with parties in the bloc, a reference to the Joint List and Ra’am (United Arab List).”
Gil Hoffman quotes Gantz as saying: “When I meet with them, I will tell them that it is okay to have principles, but it is also necessary to display the flexibility needed to enable the formation of a government and the replacement of Netanyahu.”
This reminds me of Groucho Marx: “Those are my principles, and if you don’t like them... well, I have others.”
Ra’am is the political wing of the Southern Branch of the Islamic Movement. In 1999, Raphael Israeli wrote about the Islamic Movement:
“A Muslim is not supposed to respect and act according to secular laws made by humans, but follow the Shari’a, the law which emanates from Allah himself. Thus, when the Muslim movement in Israel participates in local elections and elects Islamic mayors, they do not need to swear allegiance to the State of Israel.
“Moreover, under Israeli law, local councils are entitled to adopt bylaws, for example, governing the separation of sexes at school or forbidding the sale and consumption of alcohol. From the fundamentalist point of view, this is not an enactment of law but merely an application of the law of Allah. However, participation in government at the national level would require acceptance of the secular laws of the Jewish state and behaving in accordance with them instead of cultivating a separate patrimony in isolation and segregation.”
How can Gantz, Yair Lapid and Benjamin Netanyahu ignore this? Has political survival made our politicians abandon all their principals?
MLADEN ANDRIJASEVIC
Beersheba
Posted by Mladen Andrijasevic at 10:17 PM