PM Netanyahu has lost it. 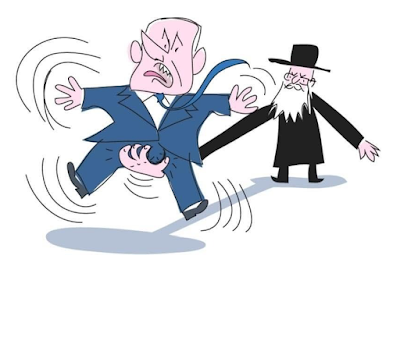 PM Netanyahu has lost it. His appeasement of the Haredim at the expense of the health of the citizens of Israel is a disgrace and is unacceptable. PM Netanyahu should have put his foot down and declared that the health of Israeli citizens takes precedence over dangerous and illogical demands of the ultra-religious, else he will have inexorably pushed this country into a split between the ultra-religious and the  secular.
All of PM Netanyahu's achievements through the years, his warnings of the continuing existential Iranian nuclear threat, his standing up to the absurd Obama policies in support of the Muslim Brotherhood and Iran Deal, his freeing of the Israeli economy and his contribution to the prestige of Israel around the world and new ties with UAE - all will be forgotten – since we will remember that he has failed in protecting our lives.

Update:  Published as a letter to the editor in the Jerusalem Post on Sept 9, 2020

Posted by Mladen Andrijasevic at 12:18 PM