Ayaan Hirsi Ali: What Islamists and ‘Wokeists’ Have in Common

Adherents of both pursue ideological purity, refuse to engage in debate and demand submission. 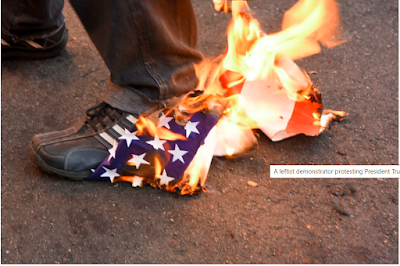 A leftist demonstrator protesting President Trump steps on a burning American flag outside the U.S. Embassy in Buenos Aires, January 20, 2017.

There were many American heroes on 9/11, but the greatest were the passengers and crew of Flight 93. Not only did they avert what al Qaeda planned—a direct hit on the White House—but they also embodied Patrick Henry’s credo “Give me liberty, or give me death!”

Do those words still have a meaning in the America of 2020? For two decades, I have opposed the fanatical illiberalism of those strands of Islam that gave rise to al Qaeda. I broke with my Somali family and ultimately with their faith because I believed that it is human freedom that should be sacrosanct, not antiquated doctrines that demand submission by the individual.

So implacable are the proponents of Shariah that I have faced repeated death threats. Yet I have always consoled myself that, in the U.S., freedom of conscience and expression rank above any set of religious beliefs. It was partly for this reason that I moved here and became a citizen in 2013.

It never occurred to me that free speech would come under threat in my newly adopted country. Even when I first encountered what has come to be known as “cancel culture”—in 2014 I was invited to receive an honorary degree at Brandeis University and then ungraciously disinvited—I didn’t fret too much. I was inclined to dismiss the alliance of campus leftists and Islamists as a lunatic fringe.

But the power of the illiberal elements in the American left has grown, not just on campus but in the media and many corporations. They have inculcated in a generation of students an ideology that has much more in common with the intolerant doctrines of a religious cult than with the secular political thought I studied at Holland’s Leiden University.

In the debates after 9/11, many people sought materialist explanations for the attacks. American foreign policy in the Middle East was blamed, or lack of education and employment opportunities in the Arab world. I argued that none of these could explain the motivations of the plotters and hijackers, who in any case were far from underprivileged. Their goal was religious and political: to wage jihad against their kin if they didn’t accept a literal interpretation of Islam, to denounce Arab governments as corrupt and their Western allies as infidels, and ultimately to overthrow the established order in the Middle East and establish a caliphate.

American policy makers preferred the materialist explanations, as they implied actions to solve the problem: invasion, regime change, democratization. It was unpopular to suggest that the terrorists might have unshakable immaterial convictions.

Nineteen years on, we see a similar dynamic, only this time it is within our borders. Naive observers explain this summer’s protests in terms of African-Americans’ material disadvantages. These are real, as are the (worse) socio-economic problems of the Arab world. But they aren’t the main driver of the protests, which appear to be led mainly by well-off white people.

Their ideology goes by many names: cancel culture, social justice, critical race theory, intersectionality. For simplicity, I call it all Wokeism.

I am not about to equate Wokeism and Islamism. Islamism is a militant strain of an ancient faith. Its adherents have a coherent sense of what God wants them to achieve on earth to earn rewards in the afterlife. Wokeism is in many ways a Marxist creed; it offers no hereafter. Wokeism divides society into myriad identities, whereas Islamists’ segmentation is simpler: believers and unbelievers, men and women.

There are many other differences. But consider the resemblances. The adherents of each constantly pursue ideological purity, certain of their own rectitude. Neither Islamists nor the Woke will engage in debate; both prefer indoctrination of the submissive and damnation of those who resist.

The two ideologies have distinctive rituals: Islamists shout “Allahu Akbar” and “Death to America”; the Woke chant “Black lives matter” and “I can’t breathe.” Islamists pray to Mecca; the Woke take the knee. Both like burning the American flag.

Both believe that those who refuse conversion may be harassed, or worse. Both take offense at every opportunity and seek not just apologies but concessions. Islamism inveighs against “blasphemy”; Wokeism wants to outlaw “hate speech.” Islamists use the word “Islamophobia” to silence critics; the Woke do the same with “racism.”

Islamists despise Jews; the Woke say they just hate Israel, but the anti-Semitism is pervasive. The two share a fondness for iconoclasm: statues, beware.

Both ideologies aim to tear down the existing system and replace it with utopias that always turn out to be hellish anarchies: Islamic State in Raqqa, the Capitol Hill Autonomous Zone in Seattle. Both are collectivist: Group identity trumps the individual. Both tolerate—and often glorify—violence carried out by zealots.

This Sept. 11, then, let’s dismiss the fairy stories about the enemies of a free society. Their grievances aren’t merely economic and they won’t be satisfied with jobs or entitlements. Their motivations are ideological and they will be satisfied only with power.

I cling to the hope that most Americans are still willing as a nation to fight and, if necessary, to die to preserve our freedoms, our rights, our customs, our history. That was the spirit of Flight 93. It was the spirit that ultimately defeated al Qaeda and Islamic State. But it is not the spirit of today’s “woke” protesters. And it is time that we all woke up to that reality.

Ms. Hirsi Ali is a research fellow at the Hoover Institution and founder of the AHA Foundation. She served as a member of the Dutch Parliament from 2003-2006.

Posted by Mladen Andrijasevic at 9:44 PM