Michael Oren on France 24 quotes the head of Hamas:“the goal of the demonstration was to enable the people of Gaza to eat the livers of Israelis” 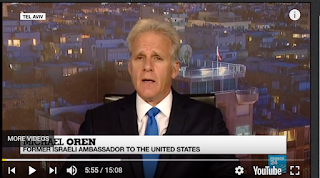 For more for an Israeli response we can cross to our guest. Michael Oren is a deputy minister in the Prime Minister’s office and the former Israeli ambassador to the United States. Thank you very much for being with us on France 24.  Looking first at that huge death toll, did yesterday’s events get out of hand?

Not at all. Good to be with you and thank you. Not at all.  Hamas drove civilians towards Israel’s border in the attempt to break that border in an attempt to kill Israelis and Israeli soldiers defended  themselves, defended our citizens as they have to. Hamas bears full responsibility for this. Among those demonstrators were terrorists. Hamas has now announced that 5 of those killed yesterday were active terrorists in the organization, they planted bombs along the border, using human shields. Hamas, an organization that is recognized by Europe as a terrorist organization bears full responsibility.

As you said Hamas has confirmed 5 of those killed were militants. That still leaves at least 11 civilians and there are no Israeli casualties. Was live fire really a proportionate response to the protest?

Indeed, every single person killed yesterday was involved in active hostility against our troops in the attempt to break to the border and kill Israelis . The head of Hamas, just recently in the last hour  announced, Mr. Sinwar announced that the goal of the demonstration was to enable the people of Gaza “ to eat the livers of Israelis”, and I am quoting:“eat the livers of Israelis” . This was a terrorist action disguised as a civilian protest, and I can’t think of anything more cynical than using these Gazans as human shields in order to attack Israelis.

Now this protest is due to last 6 weeks. Will the military review its response to avoid the repeat of the bloodshed we saw yesterday?

Our review has already been conducted and the conclusion is as it stands now is to beef up our defenses along our borders.  The incidents of yesterday were entirely justified, entirely necessary, and if Hamas keeps on using the shields of human beings  of civilians attack our border to try to break through and kill our civilians, the army will take all measures necessary  to defend us.

Will the military only respond on the border on the day to day basis?

It will take all necessary measures. We are not out to hurt Gaza civilians. In my job in government I am in charge of trying to improve the humanitarian conditions in Gaza and I must tell you Hamas does everything possible to starve its own population and even the Palestinian Authority in the West Bank under Mahmud Abas has cut off all subsidies, all medical help to Gaza, and everyone is trying to use these poor people to make a point. Israel has no interest in increasing casualties there but Israel will do everything possible and necessary to defend our citizens.

It sounds as if you are approving the idea of collective a punishment on all Gazans. Is there no lee way to alleviate the humanitarian situation?

Well, I am in touch with a number of European governments about relieving that humanitarian situation. It is very difficult.  With Hamas refusing to allow aid trucks to go into Gaza so that Hamas can claim to the world that it is suffering . With the Palestinian Authority cutting off all aid, cutting off subsidies, cutting of salaries for 50000 workers in Gaza.  Now, Israel cannot affect that. It cannot. We have the only open border into Gaza. The Egyptian border crossings are all closed. We are ready to bring through 1200 trucks a day in food and aid. Hamas has reduced it to 400. Hamas has reduced it to 400, not Israel. So this is not collective punishment by Israel. What happened yesterday was our legitimate means to defend ourselves and we will continue doing that. But we also stand ready to try to improve the humanitarian situation in Gaza. But frankly, it is in the hands of Hamas and the Palestinian Authority.

Michael Oren, thank you very much for having spoken to us.

Posted by Mladen Andrijasevic at 10:19 AM