Krauthammer: Hyperproliferation: Can We Survive It?

I have been reading Charles Krauthammer’s Things That Matter: Three Decades of Passions, Pastimes and Politics when I came to this article published in Time in 2006. Could not be more relevant today. 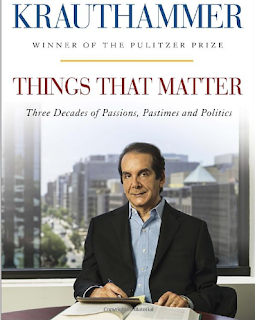 
Like many physicists who worked on the Manhattan Project, Richard Feynman could not get the Bomb out of his mind after the war. "I would see people building a bridge," he wrote. "And I thought, they're crazy, they just don't understand, they don't understand. Why are they making new things? It's so useless."

Feynman was convinced man had finally invented something that he could not control and that would ultimately destroy him. For six decades we have suppressed that thought and built enough history to believe Feynman's pessimism was unwarranted. After all, soon afterward, the most aggressive world power, Stalin's Soviet Union, acquired the Bomb, yet never used it. Seven more countries have acquired it since and never used it either. Even North Korea, which huffs and puffs and threatens every once in a while, dares not use it. Even Kim Jong Il is not suicidal.

But that's the point. We're now at the dawn of an era in which an extreme and fanatical religious ideology, undeterred by the usual calculations of prudence and self-preservation, is wielding state power and will soon be wielding nuclear power.

We have difficulty understanding the mentality of Iran's newest rulers. Then again, we don't understand the mentality of the men who flew into the World Trade Center or the mobs in Damascus and Tehran who chant "Death to America"--and Denmark(!)--and embrace the glory and romance of martyrdom.

This atavistic love of blood and death and, indeed, self-immolation in the name of God may not be new--medieval Europe had an abundance of millennial Christian sects--but until now it has never had the means to carry out its apocalyptic ends.

That is why Iran's arriving at the threshold of nuclear weaponry is such a signal historical moment. It is not just that its President says crazy things about the Holocaust. It is that he is a fervent believer in the imminent reappearance of the 12th Imam, Shi'ism's version of the Messiah. President Mahmoud Ahmadinejad has been reported as saying in official meetings that the end of history is only two or three years away. He reportedly told an associate that on the podium of the General Assembly last September, he felt a halo around him and for "those 27 or 28 minutes, the leaders of the world did not blink ... as if a hand was holding them there and it opened their eyes to receive" his message. He believes that the Islamic revolution's raison d'être is to prepare the way for the messianic redemption, which in his eschatology is preceded by worldwide upheaval and chaos. How better to light the fuse for eternal bliss than with a nuclear flame?

Depending on your own beliefs, Ahmadinejad is either mystical or deranged. In either case, he is exceedingly dangerous. And Iran is just the first. With infinitely accelerated exchanges of information helping develop whole new generations of scientists, extremist countries led by similarly extreme men will be in a position to acquire nuclear weaponry. If nothing is done, we face not proliferation but hyperproliferation. Not just one but many radical states will get weapons of mass extinction, and then so will the fanatical and suicidal terrorists who are their brothers and clients.

That will present the world with two futures. The first is Feynman's vision of human destruction on a scale never seen. The second, perhaps after one or two cities are lost with millions killed in a single day, is a radical abolition of liberal democracy as the species tries to maintain itself by reverting to strict authoritarianism--a self-imposed expulsion from the Eden of post-Enlightenment freedom.

Can there be a third future? That will depend on whether we succeed in holding proliferation at bay. Iran is the test case. It is the most dangerous political entity on the planet, and yet the world response has been catastrophically slow and reluctant. Years of knowingly useless negotiations, followed by hesitant international resolutions, have brought us to only the most tentative of steps--referral to a Security Council that lacks unity and resolve. Iran knows this and therefore defiantly and openly resumes its headlong march to nuclear status. If we fail to prevent an Iranian regime run by apocalyptic fanatics from going nuclear, we will have reached a point of no return. It is not just that Iran might be the source of a great conflagration but that we will have demonstrated to the world that for those similarly inclined there is no serious impediment.

Our planet is 4,500,000,000 years old, and we've had nukes for exactly 61. No one knows the precise prospects for human extinction, but Feynman was a mathematical genius who knew how to calculate odds. If he were to watch us today about to let loose the agents of extinction, he'd call a halt to all bridge building

Posted by Mladen Andrijasevic at 9:53 AM