Refugee crisis puts the survival of Europe at risk

Today there are an estimated 30 million “refugees” in Europe who are mostly Muslims and do not want to be integrated in the host countries. 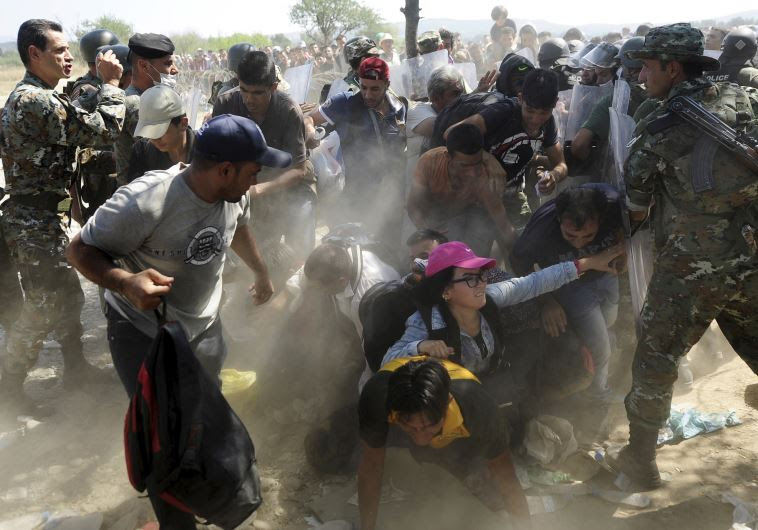 For much of world media the waves of refugees flooding the coasts of Europe are solely a humanitarian problem; countries refusing to welcome the newcomers and building walls to keep them away are harshly condemned.

While it is true that the plight of hundreds of thousands of suffering human beings must be approached with empathy and help must be extended to them, neither the media nor European leaders appear ready to tackle the issue. Yet it cannot have come as a surprise.

For years refugees have been trying to get into the old continent and the reasons are obvious. Nevertheless, Europe did nothing, in the mistaken belief that it would emerge unscathed and that some sort of solution would appear; the UN would help and somehow refugees would blend into the local populations. No attempt was made to solve the problem when it could have been solved and now the ever-growing numbers of so-called asylum- seekers threaten the peace of Europe and its traditional way of life. A courageous and far-reaching political answer must be found to deal with what has become an emergency, even at the risk of neglecting its humanitarian aspect.

Refugees have been coming from Africa and from the Middle East, two parts of the world where strife, natural disasters and hunger are rampant for lack of economic development, and extreme poverty, sickness and unemployment.

A rich and replete Europe, feeling slightly guilty because of its colonial past, chose not to see what was happening, and let in during the last 50 years millions of “asylum-seekers” who were for the most part people looking for work and a better life, and many of whom had entered illegally.

It is true that European countries have a low birth rate – 1.6 per woman – while at least 2.11 is needed to sustain the population level. They desperately needed working hands to develop their economies. Today there are an estimated 30 million “refugees” who are mostly Muslims and do not want to be integrated in the host countries.

They want to preserve their cultural and religious identity; they want to impose their Islamic way of life. Inevitably, many do not find work, and turn to drugs and petty crime. In some areas they drove out the original inhabitants because of rising insecurity.

Often the media do not want to publish the names of individuals involved in arson, violent demonstrations and worse, referring to them as “youth.”

As a result, far-right political parties, determined opponents of the increasing numbers of migrants, are getting stronger; witness their success in the latest parliamentary elections in France and Sweden, let alone Greece and Hungary. They shall keep on progressing as long as the traditional parties whether from the Left and from the Right do not tackle the issue.

In some countries such as Denmark laws have been passed to restrict refugee entry. However, this is the exception.

Meanwhile war and disaster are pushing more and more people out of Africa and the Middle East toward the safety of Europe, secure in the knowledge that no country will dare send them back. Refugee camps in Jordan, Turkey and Lebanon are full to capacity and more; local populations are complaining and more refugees would threaten the regime.

European leaders are well aware of the threat posed by the influx of refugees to their countries, even if they hesitate to say it openly. They are beginning to understand that it was a mistake to topple Muammar Gaddafi in Libya, after he had agreed to dismantle its nuclear program and to become pro-Western. While he ruled, he made sure that African refugees could not go to Europe.

For close to a century colonial powers ruled Africa, and cultural and language ties are still strong though the erstwhile powers are no longer showing much interest beyond token financial and technical assistance. Corruption is rife; Tribal feuds and wars are escalating, fueled by the rise of radical Islam fomenting trouble in Kenya, Sudan, Nigeria, Ivory Coast and Mali. In the Middle East, the so-called Islamic State is busy dismantling nation states such as Iraq and Syria Europe established after the First World War and the destruction of the Ottoman Empire. At the same time the traditional antagonism between Shia and Sunni Islam is escalating, and Iran is pursuing its goal of dominating the region against the stiff opposition of Sunni countries led by Egypt and Saudi Arabia.

It should have been obvious to all, and certainly to European leaders, that such a volatile mix and such extensive misery could not be contained forever and that they would be on the front lines. Yet nothing was done. Europe started disengaging itself from the Middle East after the Suez Campaign of 1956, letting the United States take over. Now that America, under the leadership of Barack Obama, is abandoning the region to Iran – betraying its longtime allies Egypt, Saudi Arabia and the Gulf states – there is no one left to exert any kind of influence. Europe is paying the price in the form of millions of desperate people trying to escape.

How to find a solution to a problem you do not want to acknowledge? Chancellor Angela Merkel demonstrated empathy and agreed to welcome 800,000 refugees while in southern Europe, the point of access, fences and walls are being built. Neither walls nor empathy will solve the problem, and letting more and more people come in will only accelerate the exodus from the Middle East and Africa. It would take a bold approach to achieve a solution and one wonders if Europe is ready to do it.

The issue needs to be tackled in the Middle East. Europe should send troops to Syria together with the US, which must first change its policy.

Safe areas must be created in Syria, with the help of Turkey, so that people can start rebuilding their lives.

At the same time, Europe must take the initiative in Africa, through closer cooperation and incentives, large-scale development programs to give work and hope to the people.

Yet the survival of Europe is at stake.

The writer, a fellow of The Jerusalem Center for Public Affairs, is a former ambassador to Romania, Egypt and Sweden.
Posted by Mladen Andrijasevic at 9:43 PM