What Benjamin Netanyahu just did 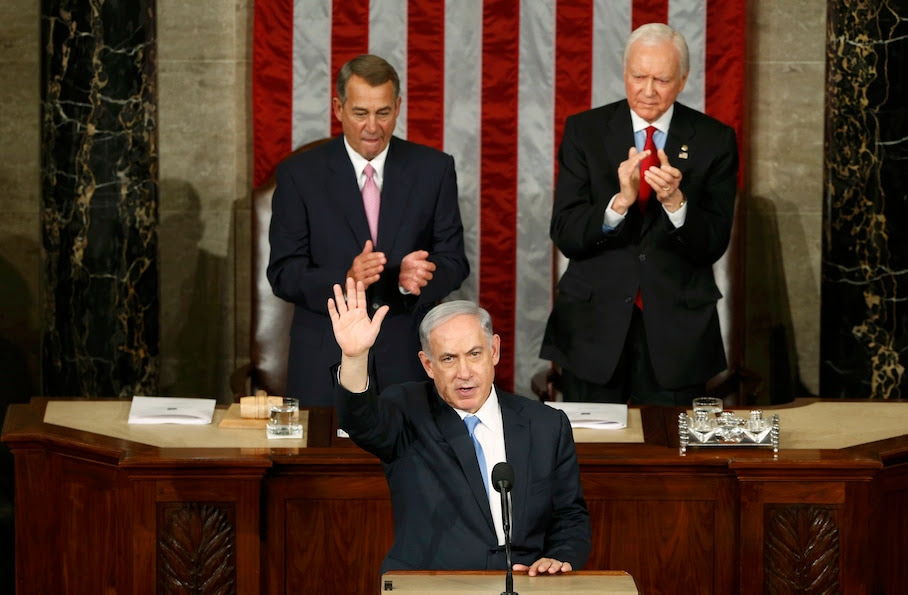 Prime Minister Benjamin Netanyahu’s speech to Congress was a devastating indictment of the P5+1′s entire approach, and it reminded and reunited Democrats and Republicans, as did Sen. Robert Menendez’sspeech to AIPAC Monday, on what is at stake and why the deal under contemplation can never come to pass.

As a preliminary matter, it is evident that had the president not thrown a fit, Netanyahu’s speech might not have garnered quite so much attention. But to be honest, the fuss mostly remained in the media. When the chips were down, it appeared that all but far-left lawmakers and Congressional Black Caucus members attended. That, incidentally, is a problem on the left, which has become virulently anti-Israel, as has the left in Europe and elsewhere (hence the BDS movement’s prominence on left-wing campuses and European capitals).

The speech was not aimed at the president, who is immune to reason, nor to the negotiators who suffer from a variation of Stockholm Syndrome, whereby they come to identify with their bargaining opponents more than the country they represent. It was aimed at American public opinion and uncertain Democrats on whose good judgment Netanyahu must rely to derail a disastrous deal. By flattering the president and Democrats, Netanyahu gave them an out to agree with him without crossing the president or appearing to give in to Republicans. He said so bluntly it was starting: This is a bad deal. No deal is better. And he explained exactly why.

In laying out his argument in such logical order — explaining the nature of the threat, the two central flaws in the deal (leaving Iran with most of its nuclear infrastructure and lifting restrictions after a decade) and explaining the false choice between this deal and war (instead, hold the line and beef up sanctions) — he made clear that if one understands the nature of the Iranian regime and what the concessions mean, one cannot be in favor of this deal. “Absent a dramatic change, we know for sure that any deal with Iran will include two major concessions to Iran. The first major concession would leave Iran with a vast nuclear infrastructure, providing it with a short break-out time to the bomb. Break-out time is the time it takes to amass enough weapons-grade uranium or plutonium for a nuclear bomb. . . . But the second major concession creates an even greater danger that Iran could get to the bomb by keeping the deal. Because virtually all the restrictions on Iran’s nuclear program will automatically expire in about a decade.” The conclusion was nearly inescapable: “It doesn’t block Iran’s path to the bomb; it paves Iran’s path to the bomb.”

From identical talking points spouted by Obama administration apologists, we know the Obama defense is that there is no alternative. But Netanyahu gave them one, and in doing so pointed Congress in the right direction.”We can insist that restrictions on Iran’s nuclear program not be lifted for as long as Iran continues its aggression in the region and in the world. Before lifting those restrictions, the world should demand that Iran do three things. First, stop its aggression against its neighbors in the Middle East. Second, stop supporting terrorism around the world. And third, stop threatening to annihilate my country, Israel, the one and only Jewish state.” He was greeted with thunderous applause.

And how to get there? “Well, nuclear know-how without nuclear infrastructure doesn’t get you very much. A race car driver without a car can’t drive. A pilot without a plane can’t fly. Without thousands of centrifuges, tons of enriched uranium or heavy water facilities, Iran can’t make nuclear weapons. Iran’s nuclear program can be rolled back well-beyond the current proposal by insisting on a better deal and keeping up the pressure on a very vulnerable regime, especially given the recent collapse in the price of oil. Now, if Iran threatens to walk away from the table — and this often happens in a Persian bazaar — call their bluff. They’ll be back, because they need the deal a lot more than you do. And by maintaining the pressure on Iran and on those who do business with Iran, you have the power to make them need it even more.” In other words, stop chasing a deal, tighten the screws and give the regime a choice between economic collapse and nukes.

He made three other salient points that the administration would rather obscure.
First, even if the deal on the table was inked, it would set off a series of events far worse than having no deal: “So this deal won’t change Iran for the better; it will only change the Middle East for the worse. A deal that’s supposed to prevent nuclear proliferation would instead spark a nuclear arms race in the most dangerous part of the planet. This deal won’t be a farewell to arms. It would be a farewell to arms control.”

Second, he explained that the hope of Iran changing its stripes down the road is entirely illogical. “Why should Iran’s radical regime change for the better when it can enjoy the best of both world’s: aggression abroad, prosperity at home? This is a question that everyone asks in our region. Israel’s neighbors — Iran’s neighbors know that Iran will become even more aggressive and sponsor even more terrorism when its economy is unshackled and it’s been given a clear path to the bomb. . . . If anyone thinks — if anyone thinks this deal kicks the can down the road, think again. When we get down that road, we’ll face a much more dangerous Iran, a Middle East littered with nuclear bombs and a countdown to a potential nuclear nightmare. Ladies and gentlemen, I’ve come here today to tell you we don’t have to bet the security of the world on the hope that Iran will change for the better. We don’t have to gamble with our future and with our children’s future.”

Both want to impose a militant Islamic empire first on the region and then on the entire world. They just disagree among themselves who will be the ruler of that empire. In this deadly game of thrones, there’s no place for America or for Israel, no peace for Christians, Jews or Muslims who don’t share the Islamist medieval creed, no rights for women, no freedom for anyone. So when it comes to Iran and ISIS, the enemy of your enemy is your enemy.”

It was masterful in many ways. But ultimately, Israel won’t be hobbled or restrained if Netanyahu’s message falls on deaf ears. He wrapped up with a reminder, as he pointed to Holocaust survivor Elie Wiesel in the gallery: “And I wish I could promise you, Elie, that the lessons of history have been learned. I can only urge the leaders of the world not to repeat the mistakes of the past. Not to sacrifice the future for the present; not to ignore aggression in the hopes of gaining an illusory peace.  But I can guarantee you this, the days when the Jewish people remained passive in the face of genocidal enemies, those days are over. We are no longer scattered among the nations, powerless to defend ourselves. We restored our sovereignty in our ancient home. And the soldiers who defend our home have boundless courage. For the first time in 100 generations, we, the Jewish people, can defend ourselves.”

That’s the hope, and he made it that much more likely by debunking nearly every false note, phony argument and wrong assumption guiding the administration. He is betting congressional Democrats and the American people are smarter and wiser than Obama. How could they not be?

Posted by Mladen Andrijasevic at 4:23 AM