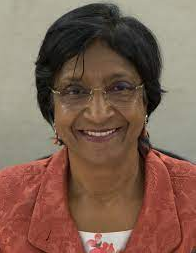 This is the same Pillay who in 2014 suggested that Israel should be sharing its Iron Dome defensive technology with Hamas, the very terror group that was launching rockets at Israeli civilians.

This was not a joke. Navi Pillay was serious. The UN has become a bad joke.

Posted by Mladen Andrijasevic at 11:53 PM