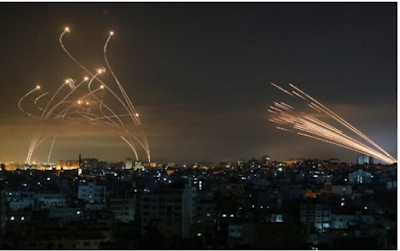 Palestinian Islamic JIHAD/Hamas rockets on the right and Iron Dome interceptors on the left.  (Photo by ANAS BABA / AFP)

Hamas Charter, Article 13: There is no solution for the Palestinian question except through Jihad

The mind-boggling ignorance of most of the Israeli political establishment, let alone the world, to understand and explicitly say that both Hamas and Palestinian Islamic Jihad are waging a jihad even when the very name of their organization says so,  comes from their profound ignorance of Islamic history and conquest. The same ideology which conquered Jerusalem, Persia, Anatolia, the Balkans, north Africa, Sindt, India and Andalusia is at work today. We have a clear case of a democracy fighting jihad yet nobody wants to point to the elephant in the room.

Update May 16, 2021. From the response I received I realize that a definition

of  jihad is necessary.

"It is common nowadays for the apologists of Islam, whether Muslims or their Western admirers, to interpret "Jihad" in the non-military sense of "moral struggle," "moral striving." But it is quite illegitimate to pretend that the Koran and the books on Islamic Law were talking about "moral crusades." Rather as Rudolf Peters says in his definitive study of Jihad says, "In the books on Islamic Law, the word means armed struggle against the unbelievers, which is also a common meaning in the Koran." Apologists of Islam, even when they do admit that real battles are being referred to, still pretend that the doctrine of Jihad only talks of "defensive measures," that is, the apologists pretend that fighting is only allowed to defend Muslims, and that offensive wars are illegitimate. But again, this is not the classical doctrine in Islam; as Peters makes clear, the Sword Verses in the Koran were interpreted as unconditional commands to fight the unbelievers, and furthermore these Sword Verses abrogated all previous verses concerning intercourse with non-Muslims.

In the Dictionary of Islam (1885), Thomas Patrick Hughes, offers this definition of Jihad: “Lit. “An effort, or a striving”. A religious war with those who are unbelievers in the mission of Muhammad. It is an incumbent religious duty established in the Qur’an and in the Traditions as a divine institution, and enjoined specially for the purpose of advancing Islam and of repelling evil from Muslims”.

Peace or Jihad, Abrogation in Islam

Chapter 9 of the Qur'an, in English called "Ultimatum," is the most important concerning the issues of abrogation and jihad against unbelievers. It is the only chapter that does not begin "in the name of God, most benevolent, ever-merciful."[54] Commentators agree that Muhammad received this revelation in 631, the year before his death, when he had returned to Mecca and was at his strongest.[55] Muhammad bin Ismail al-Bukhari (810-70), compiler of one of the most authoritative collections of the hadith, said that "Ultimatum" was the last chapter revealed to Muhammad[56] although others suggest it might have been penultimate. Regardless, coming at or near the very end of Muhammad's life, "Ultimatum" trumps earlier revelations.

Because this chapter contains violent passages, it abrogates previous peaceful content. Muhsin Khan, the translator of Sahih al-Bukhari, says God revealed "Ultimatum" in order to discard restraint and to command Muslims to fight against all the pagans as well as against the People of the Book if they do not embrace Islam or until they pay religious taxes. So, at first aggressive fighting was forbidden; it later became permissible (2:190) and subsequently obligatory (9:5).[57] This "verse of the sword" abrogated, canceled, and replaced 124 verses that called for tolerance, compassion, and peace.[58]

Posted by Mladen Andrijasevic at 12:42 AM