Iran's supreme leader has hardened his stance on the nuclear negotiations with world powers, with the deadline for a comprehensive agreement only days away.

In a speech on Tuesday night, Ayatollah Ali Khamenei insisted Iran would only dismantle its nuclear infrastructure if economic sanctions were lifted first.

He also ruled out a freeze on research and development for 10 years, as well as inspections of military sites.

The demands appear to undercut a framework deal announced in April.


They could also limit the ability of Iran's negotiating team to make key concessions as the self-imposed 30 June deadline approaches.

As supreme leader, Ayatollah Khamenei has final say on all state matters 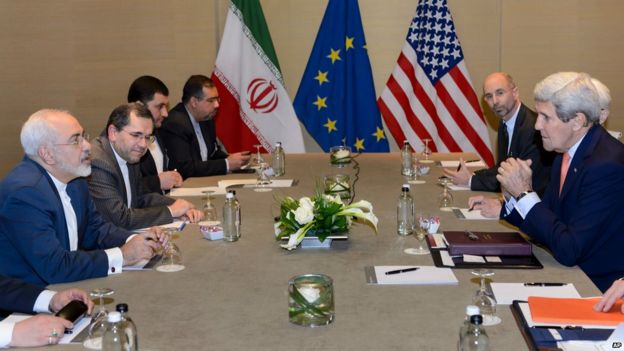 The so-called P5+1 - the US, UK, France, China and Russia plus Germany - want Iran to scale back its sensitive nuclear activities permanently to ensure that it cannot build a nuclear weapon. Iran insists its nuclear work is peaceful.

Ayatollah Khamenei has repeatedly backed Iran's negotiators amid criticism from hardliners and military leaders, but he has laid out a several red lines.

In a speech broadcast on state television on Tuesday, he ruled out halting sensitive nuclear research and development work for the 10 years agreed under the outline plan.

The supreme leader also accused the US of offering a "complicated formula" for lifting US, EU and UN sanctions which have crippled Iran's economy.

"Lifting sanctions can't depend on implementation of Iran's obligations," he warned.

The US has proposed a phased withdrawal of sanctions dependent on international inspectors verifying Iranian compliance with its pledges to convert uranium enrichment facilities, dismantle centrifuges to enrich uranium, and reduce its stocks of enriched uranium. Enriched uranium can be used to make fuel for both nuclear energy and nuclear weapons.

Ayatollah Khamenei also reiterated that he rejected allowing international inspectors to visit Iran's military sites, which Western countries suspect have been used for nuclear weapons research, or interviewing its nuclear scientists, five of whom have been assassinated.

"[The United States'] goal is to uproot and destroy the country's nuclear industry," he said. "They want to keep up the pressure and are not after a complete lifting of sanctions."

Earlier on Tuesday, Iran's parliament also approved draft legislation that would ban access to military sites, documents and scientists as part of any deal with the P5+1.

However, US state department spokesman John Kirby stressed on Tuesday that inspections of suspicious sites would be a key part of any agreement.

"For us, nothing's changed about what's necessary for a final deal, which includes access and transparency that will meet our bottom lines," he told reporters.

As if this would prevent Obama to capitulate even more...

Posted by Mladen Andrijasevic at 4:49 AM