Why are Bernard Lewis's views on MAD being ignored?

Bernard Lewis's new book Notes on a Century : Reflections of a Middle East Historian was published ten days ago.  "Replete with exceptional historical insight that one has come to expect from the word's foremost Islamic scholar"  - THE WALL STREET JOURNAL.Actually, the book is replete with dry British humor and I could not stop laughing.  However, it also  discloses  excerpts  from the emails he had sent to Stephen Hadley, President Bush's National Security Advisor, but judging by the reviews this part (page 333) does not exist: 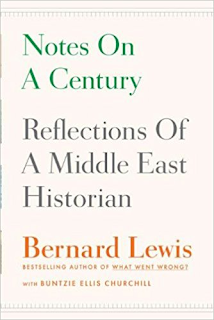 Of the four reviews of the book I've read  in Tablet Magazine ,  Amazon ,  Wall Street Journal and  The Chronicle , not one mentions Bernard Lewis's opinions on MAD and Iran.  True, in a short review one cannot touch all the aspects of the book.  But surely what the leading scholar of Islam in the West has to say about the most crucial threat facing humankind today is worth a comment?  But the reviews completely ignore it .  It is not that the reviewers  of Notes on the Century  disrespect Bernard Lewis.   On the contrary.  They are aware of his background , the languages he speaks , the width and depth of knowledge he possesses.  The reviews are positive.  And  yet,  the reviewers  do not know what to do with MAD.  On the one hand, here is a most erudite, respected scholar  and on the other,  he is saying such, to them, off the wall things no one else dares to mention.  What to do? The best thing is to ignore it.  Perhaps if someone else in the media would volunteer and bring  up the topic, they would pitch in.   No one in the main stream media does.  So much for the information age we believe we live in.

Professor Lewis, if Iran, as you say, is racing for regional supremacy and upending, destabilizing  Arab regimes with the same energy it plans to destroy Israel, what does it mean for places like Gaza and the West Bank. To what extend are they part of the Iranian plan, or how should we think about the closer battlefields to home?

I think one might divide them into two groups. On the one hand, you have the groups that are themselves Shi’a.  Shia are an important part of the population of Syria and Lebanon.  Hizballah is a Shi’at organization. Their link with Iran and the Iranian revolution is clear and obvious.  There are no Shi’a Palestinians.  And as I said before, where the distinction does not exist it is not important. That is why it is possible for groups of people in Muslim Africa, which is solidly Sunni, or among the Palestinians who are solidly Sunni, to take up the Iranian cause and  that is why I think we find that Hamas has accepted support from Iran  and is rallying to the Iranian cause, because for them, in their historical religious awareness the Sunni-Shi’a difference is not that important .

I think in the Muslim perception it is basically a religious conflict. It is to decide who will dominate Islam , whose version of Islam will prevail in the Islamic world. And there  is no doubt that the Iranians have plans going far beyond the Middle East, and extending eastwards into south and south-east Asia, westwards into t Muslim Africa, and there are signs of that in various places. The impact has been enormous. As I said, t had the same kind of impact as the French and Russian revolutions in their days, with the same kind of response.

There is one other point, which I think I will mention if you would allow me, and that is what I would call the apocalyptic aspect.  In Islam, as in Judaism ,  as in Christianity, there is a scenario for the End of Time. When the final battle takes place between the forces of good and the forces of evil, of which for Christians, Jews and Muslims alike means between us and them, the us being differently defined and them being more or less the same. In the Muslim view, no, let me correct that, in the view of a certain section within the Iranian leadership, it is not by any means unanimous, that time is NOW. For a group called the Hujtieh whose main leader is Ahmadinejad, the apocalyptic time has come. The Mahdi, the Muslim Messiah is already here. The final battle between the forces of good and the forces of evil has already begun.

That is extremely important for another, not immediately related reason. That is the question of Iran’s nuclear weapon. The Soviet Union had nuclear weapons right through the Cold War, but neither side used them because both sides were aware that if either one did  the other would do the same and this would lead to mutual destruction - MAD as it was known at the time. Mutual assured destruction was the main deterrent preventing the use of nuclear weapons by the Soviets   For most of the Iranian leadership MAD would work as a deterrent, but for Ahmadinejad and his group with their apocalyptic mindset mutually assured destruction is not a deterrent, it's an inducement and they believe that the End of Time has come, the final battles are already beginning  and the sooner the better, so that the good can  go and enjoy the delights of paradise and the divine brothel in the sky and the wicked, that means all of us here, will go to eternal damnation.

You have expressed concern in your writings, from the Return of  Islam to The Roots of Muslim Rage, even to more recent articles that the West is not getting something about Islam. What are they missing?

It is normal for human beings to judge others by ourselves. We are now in the 21st century of the Christian era. They are in the early fifteenth century of the Muslim era. It is a different religion based on entirely different historical experience, different message, different teaching, and it is therefore a grave error to do what people normally do, and that is judge others by ourselves.  It does not work and it is dangerously misleading.  If one looks at Islam from within and for that it is necessary to learn at least one Muslim language, something which many Middle East experts, in fact most Middle East experts in the West, for one reason or another are reluctant to do, if one learns he languages and reads what they say among themselves, and understands it in the context of their own history, their own culture, their own background, then I think I is not too difficult to understand what is happening.

Then why is it if Egypt, Saudi Arabia, the Gulf states, the Palestinian Authority in the West Bank are publicly condemning Iran and their servants, their Sunni and  Shiite servants  or proxies or surrogates, why is the Arab establishment unwilling to fight when they are so frightened of what they perceive is an existential  threat to them?

Because the Arab establishment as you call it consist mainly of rather unpopular autocracies. Looking at it from a western point of view, if you look around the Middle East you could divide the countries into two groups: countries with pro- western, lets be more specific, countries with more pro- American governments and therefore anti American populations and countries with ant-American governments and therefore pro- American populations, the second consisting essentially of Iran. We in the West are seen as the sponsors, the aiders and  abettors of the tyrannies that rule over them. Now I see at the moment that the regimes , the rulers of Egypt and others, see the threat and are therefore turning to Israel. That does not mean that the populations of those countries see it that way or are turning to Israel.  Take the specific case of what has been happening in Gaza.  Mubrak and his government, his whole ruling apparatus, feel mortally threatened by the pro- Iranian presence in the Gaza Strip and they are very happy to see it demolished, but that is not the case with the large part of the Egyptian population. I mean the Hamas people in Gaza are the part of the Muslin Brothers. The Muslim Brothers constitute a very significant opposition group within Egypt and Egyptian population. And there too Sunni-Shi’a business is not important. The revolutionary appeal, even the apocalyptic appeal of Shiism has some impact.

Posted by Mladen Andrijasevic at 9:45 AM