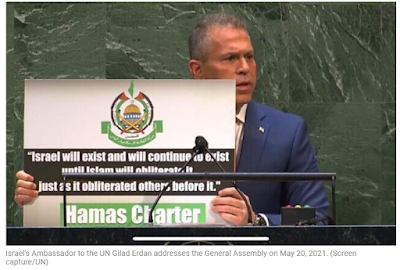 Israel's Ambassador to the UN, Gilad Erdan, addressed the General Assembly of the UN on May 20, 2021 and said the following:

Let me remind you of what many of you, unfortunately, ignore: Hamas is an internationally designated jihadi terrorist organization that has fired more than four thousand rockets at Israeli cities over the last 11 days. Right now, as I speak to you, Israeli civilians are running to find shelter from Hamas's indiscriminate attacks.

Here is a quote from the Hamas charter: “Israel will exist and will continue to exist until Islam will obliterate it, just as it obliterated others before it.”

And it continues: “The Day of Judgement will not come until Muslems fight the Jews and kill them.”

About time! Why did it take Israel 14 years of Hamas rocket attacks before it finally quoted the Hamas Charter at the UN? Are we going to wait another decade before they draw attention to the Jihad in Palestinian Islamic Jihad?

This following article I wrote 13 years ago:

By Mladen Andrijasevic
Israeli president Shimon Peres gave this statement yesterday: "Nobody in this world understands what are Hamas' goals and why it continues to fire missiles,"  "This shooting has no point, no logic, and no chance."
I am angry with Shimon Peres. Was it so difficult to read Hamas' Charter, Article 13 "There is no solution to the Palestinian problem except by jihad." or Article 7 of the Hamas Charter which reads "O Muslim! there is a Jew hiding behind me, come on and kill him!"  and  is taken from hadith Bukhari (Vol 4, Book 52, No. 177) and quotes Prophet Muhammad?
Do all these Middle East experts from Tony Blair to Martti Ahtisaari really believe that Hamas will "moderate" and  go against what Muhammad ordered? Had they read one book by Ibn Warraq, Bat Ye'or, Ayaan Hirsi Ali or Robert Spencer they  would have understood that one word explains it all - jihad.  After all, the name of the parallel organization to Hamas says it explicitly  - Islamic Jihad. The ten ton elephant is in the middle of the room, but they refuse to see it.
Why is it that we have to suffer because our political elites are in denial  and refuse to read up on jihad and educate themselves?  Enough is enough. How long is the civilization which created the Grad rocket used by the jihadists, created the laptops and software ( Google Earth) they are targeting us with, the integrated chips, microprocessors, flip-flops, half--adders, p-n junctions, down to the Schrödinger equation, how long will we who created all they are using to attack us with refuse to look at the vast information available at our fingertips about their motives?
Never in human history has the future of our civilization depended on the group so reluctant to look into quite easily accessible information.

Posted by Mladen Andrijasevic at 1:43 AM