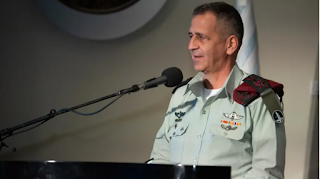 You don't have to be a nuclear scientist to realize that Kochavi’s “briefing” was in complete harmony with Prime Minister Benjamin Netanyahu’s worldview and policies.

IDF Chief of Staff Lt.-Gen. Aviv Kochavi’s speech at the annual Institute for National Security Studies (INSS) conference on Tuesday aroused the kind of debate among Israeli pundits and politicians that is particularly relevant in the wake of US President Joe Biden’s inauguration this month, and in the lead-up to the March 23 Knesset elections.

In his address, Kochavi conveyed a two-pronged message: that the administration in Washington should not return to the Joint Comprehensive Plan of Action (JCPOA) in its current form or any updated version of it; and that the Israeli military is preparing for the possibility of an attack on the Islamic Republic’s nuclear facilities.

The way he did this, in part, was to underscore the difference between friend and foe.

“The world power with which we have the strongest ties is the United States,” he stated. “The cooperation [between us] is outstanding, both strategically and operationally. With each passing year, we increase the scope of coordination and achieve the highest level of intimacy. We also have understandings and even operational coordination with Russia – something that can’t be taken for granted – and our coordination and military ties with Egypt and Jordan are only strengthening.”

He then pointed to the Abraham Accords. “The normalization [with Arab countries in the region] creates a counter-wave against our enemies, many of whom...  were already quite isolated, and now are even more so,” he said, adding, that “for the most part, we have considerably minimized [those] enemies’ ability to transfer weapons via air, land and sea, and... funds earmarked for terrorism.”

Here he issued a warning to the regime in Tehran and its proxy groups in Gaza, Lebanon and Syria.

“On the day [that our enemies] declare war, many, many missiles will fall [on Israel]. We’re doing everything we can to prevent that... But it’s precisely against this threat that we intend to launch a massive attack – on open and urban enemy areas, and on buildings housing missiles and other weapons,” he announced. “Iran... feeds terrorism around the world [and]... there’s no doubt in anybody’s mind that [it] has striven to achieve, marked as a target, desired and built the capability of a nuclear military state...”

HE WAS even more specific about his utter opposition to any iteration of the JCPOA, which he insisted would have enabled Iran to obtain a nuclear bomb “in a matter of months or even weeks.”

“A return to the nuclear deal of 2015, or even a similar agreement with a number of improvements, is bad and wrong, both operationally and strategically,” he asserted, claiming that any such agreement would enable Iran to forge, full speed ahead, with its uranium enrichment and centrifuge development – and spark the nuclearization of the entire Middle East.

Without mentioning it by name, he praised the previous US administration’s “maximum pressure” campaign on Iran, which contributed to the country’s dire economic straits and disgruntled population. All such measures, he said, must be maintained, though Iran could still decide to step up its nuclear efforts.

Meanwhile, he concluded, “I have directed the IDF to prepare a number of operational plans, in addition to existing ones,” so that in the event that the political echelon decides to implement them, they will be “on the table, ready and practiced.”

YOU DON’T have to be a nuclear scientist, Iranian or otherwise, to realize that Kochavi’s “briefing” was in complete harmony with Prime Minister Benjamin Netanyahu’s worldview and policies. Naturally, then, opponents of Netanyahu’s continued leadership promptly pounced on the IDF chief.

The most tired criticism, such as that leveled by Channel 12 anchor Oded Ben Ami, was that Kochavi was creating unnecessary friction with Washington before Biden even had a chance to settle into the White House.

The most amusing was that Israel’s top military man should have taken a slightly more pacifist approach, like that of his predecessor, Gadi Eisenkot, who – at the INSS conference in 2016 – lauded the JCPOA as a “historic turning point,” and last month penned an article in the Hebrew daily Yediot Aharonot, arguing that Israel’s current security challenges “do not constitute an existential threat.”

By far the most ridiculous, however, came from former deputy IDF chief of staff Yair Golan – a rabid leftist and Meretz MK – who accused Kochavi, among other things, of highlighting threats as a way of vying for a larger defense budget.

Iran probably isn’t taking Kochavi’s detractors any more seriously than the bulk of the Israeli public does. In any case, the powers-that-be in Tehran are more focused at the moment on Biden and the team he is assembling.

So far, it’s an encouraging lineup for anyone hoping for, and literally banking on, a US return to the JCPOA. But none is as blatant an appeaser as Robert Malley, who – according to a source cited in Politico on Wednesday – accepted Secretary of State Antony Blinken’s offer to replace Elliott Abrams as US special representative for Iran, “but also asked for a team that would represent a broad diversity of viewpoints on how best to renegotiate the Iran deal.”

Malley, who heads the International Crisis Group NGO, led the Middle East desk of the National Security Council under former US president Barack Obama. The “conflict resolution” expert, an advocate of engagement with Hamas and the Muslim Brotherhood, was a key negotiator of the JCPOA.

NO WONDER radical leftist organizations, such as Code Pink and J Street, are rooting for his appointment. Nor should it come as a surprise that noted Israel-basher Peter Beinart, author of The Crisis of Zionism, is also in Malley’s corner.

In a lengthy blog screed on Tuesday, Beinart wrote that “like Obama, Malley’s background enables him to see America – and the West more generally – from the outside-in and the bottom-up. In 1996, Malley published ‘The Call From Algeria,’ a careful study of what he called Third Worldism – ‘the belief in the revolutionary aspirations of the Third World masses’ – an ideology, he notes, to which his parents ‘dedicated their lives.’”

The mullahs and their puppets must be happy at the prospect of having Malley as their point man to push America back to the JCPOA. After four years of former president Donald Trump – who not only withdrew from the nuclear deal, but brokered peace accords between Israel and anti-Iranian Sunni-Arab states – they’re hungry to regain the upper hand in talks with US officials. They also yearn to rid themselves of the crippling sanctions that make their hegemonic aims more difficult and time-consuming to achieve.

THIS BRINGS us back to Israel, which reaped many benefits from the Trump administration, among them the freedom to act against Iran and other enemies without being chastised for it. Though Netanyahu has been consistent throughout his career in viewing Iran as the world’s greatest threat – and acted accordingly, including during Obama’s two terms in office – he was given full legitimacy by and backing from Trump.

So, while he and Kochavi realize that the honeymoon with Washington is about to turn into a mere marriage of convenience, if not a hostile union, they can’t afford to succumb to despair. Nor can they let Iran sense any weakness on their part.

It is undoubtedly for this reason that he offered the following description of “what our enemies think of us.”

Israel, he said, “is perceived as a country that takes high-level action all over the Middle East... that succeeds in defending itself and... in safeguarding its borders and assets. [It’s] perceived as enterprising and high-functioning.”

The Israelis who berated Kochavi for that speech have been too busy viewing Netanyahu as an enemy to grasp what the United Arab Emirates, Bahrain, Sudan and Morocco understand very well: Iran is the villain; Israel is the hero.

Posted by Mladen Andrijasevic at 7:20 AM