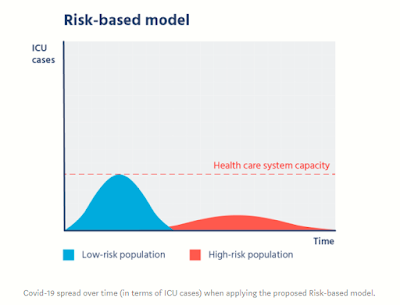 The man who developed the driverless technology firm Mobileye and then sold it to Intel for $15.3 billion – the largest Israeli exit to date and the world's biggest purchase of a company solely focused on the autonomous driving sector – says he has a plan to get Israelis out of lockdown and back to work.

“Physicians help us when we are sick, but they are not going to release us from this crisis,” Amnon Shashua told The Jerusalem Post. “This is a problem to be solved by mathematicians, statisticians, computer scientists, epidemiologists and economists… Our duty is to make sure that all the right minds are putting their CPU power into this problem.”

Shashua and Prof. Shai Shalev-Shwartz of Hebrew University’s Computer Science Department came up with a plan, which they first laid out on March 26 on the online publishing platform Medium in English in an essay titled, “Can we Contain COVID-19 without Locking down the Economy?” The next week, Shashua presented his proposal before the Knesset Coronavirus Committee. On Sunday, he updated and adapted the plan in Hebrew.

Now, it is among the programs being considered by the National Security Council and eventually the prime minister.

The idea, Shashua explained, is that the population can be divided into low- and high-risk groups. People under the age of 67 and without underlying medical conditions are low risk. Those over 67 – “which represents the retired segment of society” – or with co-morbidities are high-risk.

“The low-risk group... is released to their daily routine while following certain distancing protocols that are aimed at slowing the spread – while keeping the economy undisrupted to a large degree, but ultimately reaching a herd immunity level,” and “quarantine the high-risk,” they wrote.

Given the herd immunity of the low-risk group, the team predicted, the country could gradually release the high-risk population.

Shashua admitted that we still don’t even know for sure that a person develops immunity to COVID-19 and cannot be reinfected with the virus a second time – although with most similar viruses, this is the case. Nonetheless, in his latest version, he maintains that this is not an essential factor.

“The question is how do we guarantee that the health system will not be overwhelmed during the spread of the virus in the low-risk group?” Shashua said, explaining that the program is designed to allow the health system to cope with the expected number of severe cases.

The percentage of Israelis on ventilators that are from the low-risk group is around 15%, Shashua explained. Through a complex series of mathematical equations that are included in the essay, Shashua and Shalev-Shwartz determined that the number of ventilators that would be needed to handle the low-risk group if the country rolled out risk-based selective quarantine would be around 2,000.

According to the Health Ministry, Israel has around 3,500 ventilators, or roughly one for every 2,500 citizens. And Shashua said that the need for 2,000 ventilators was pessimistic.

“What we propose here is a worst-case analysis,” they wrote on Medium. “The idea is to adopt a pessimistic view and show that even under this pessimistic view, the health system is not likely to collapse” with this plan.

“Everyone is putting their hopes into surgical quarantine,” Shashua said, the idea that the country will test anyone who has coronavirus symptoms. If the person tests positive, he or she is quarantined, epidemiological tracking is carried out and all those who they were in contact with are also isolated.

“Testing is expensive and finite,” he argued. “And even if you did try to test the entire symptomatic population, chances are you will miss people and then you will have an exponential increase of infection.”

Moreover, since as many as half of all coronavirus patients are asymptomatic, they spread the disease but don’t get tested. Add to these people those who will not cooperate and report their symptoms because they don’t want to be tested, and the virus spreads quickly.

“A full population-wide quarantine is not a solution in itself,” they wrote in their essay. “The lockdown could take anywhere from weeks to months. This is the safest route but does not prevent a ‘second wave’ from occurring.”

He said that in all other selective quarantine models, the high-and low-risk are equally susceptible to be infected so that even if the health system is not overwhelmed, the mortality of the high-risk group is still likely to be higher than in the risk-based model.

“We are in one of the biggest crises of humanity in 100 years… and I don’t hear a diverse set of voices in this crisis. I only hear the voice of the Health Ministry, and they are in hysterics,” Shashua stressed.

“Send the young kids to school,” he continued. “Their parents are the lowest-risk population. Release the lock-down on these people. You have flexibility with the low-risk population, and you can maintain the economy this way for 18 months until a cure or vaccine is available.

“This strategy is backed by mathematics,” he concluded.

I am worried that this might end up similar to what happened in the UK when they initially wanted to build herd immunity, in that all seems very logical until young people from the low-risk group start dying . This is the part of the paper I am worried about:

“We ignored the fact that some severe cases could end up in the mortality statistics even when given proper care. In fact, there are two probabilities to estimate (i) the probability of being in the ”severe” category among the low-risk group, and (ii) the probability of mortality given proper care.  We have bounded the former and ignored the latter.   The reason for doing so is that the latter is beyond the scope of this paper because it is essentially a moral tradeoff between ”safety” and ”usefulness” that is employed in every aspect of society.   For example, society does not put a lockdown on passenger car use in order to significantly reduce car accidents even though such a lockdown will save lives. Likewise, governments do not allocate infinite budgets for the health system even though there is a correlation between increased investments and saving lives.”

There are no easy solutions and this could be the least painful one, but the moral tradeoffs will have to be discussed.  Just like epidemiologist Marc Lipsitch’s proposal  that 100 altruistic young people should volunteer to get a vaccine for Covid-19 and then be infected with the coronavirus on purpose.

Posted by Mladen Andrijasevic at 2:09 AM