15 reasons to embrace the Trump Plan 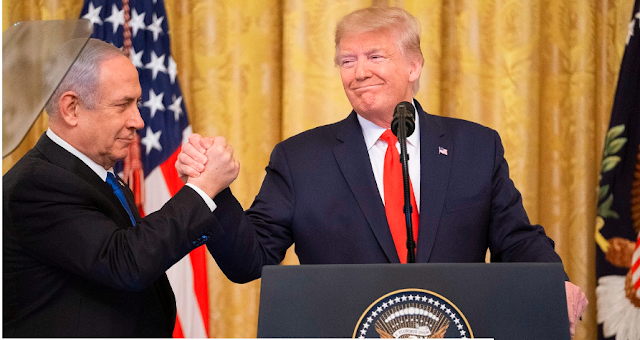 President Donald Trump’s administration’s outline for Middle East peace is not risk-free, neither for Israel nor its neighbors. It doesn’t fully satisfy any side. I am particularly concerned about the proposed handover of large tracts of land in the Negev and about the fate of 15 isolated Jewish towns in Judea and Samaria.

Nevertheless, the Trump plan should be embraced and swiftly acted upon by Israel, for at least 15 reasons:

1. Because it transforms the Mideast peace paradigm. It discards stale formulas based on maximalist Palestinian demands (the 1949 “Green” armistice lines, the “Clinton parameters,” the “Kerry outline,” UNSC resolution 2334, etc.) in favor of historical truths and concrete realities.

2. Because it reverses the long-term deleterious peace process dynamic whereby Israel always was expected to give land in exchange for Palestinian promises. Instead, the Trump initiative sets in place a process whereby Israel gets land (sovereignty now over 30% of Judea and Samaria, as a start) and gives promises  (agreement-in-principle to a Palestinian state down the road).

3. Because it tells the Palestinians that time is not on their side. The longer they reject peace with Israel the less independence they might obtain. The plan for Palestinian statehood has an expiration date and a mechanism for dialing-back its parameters if Palestinian leaders don’t live up to basic obligations.

4. Because it recognizes a permanent eastern border for Israel, based on historical Jewish settlement rights and Israeli security needs. And Israel can declare these borders immediately, irrespective of Palestinian approval or disapproval.

5. Because it breathes new life into all 150 Israeli towns in Judea and Samaria. Settlements are no longer “obstacles to peace.” They will no longer fall under Israeli military rule (in what was derogatorily called “occupation”) but be brought into the bosom of the sovereign State of Israel. And Israel will be free to build more homes in these towns without restriction. No Israeli (or Palestinian) will be forced out of his home, ever, anywhere in the Land of Israel. There will be no repeat of the Gush Katif expulsion tragedy.

6. Because the plan insists that no home construction take place over the next four years in 50% of what has been called “Area C” – land that remains open to negotiation. This means Israel will have to counter pirate Jewish settlement initiatives there, but also that Israel can finally act against illegal Palestinian settlements being built in strategic areas with the brazen support of the European Union.

7. Because the plan endorses permanent Israeli security control of the entire West Bank envelope. This includes “security at all international crossings” into a (possible, eventual) completely demilitarized State of Palestine, and an Israeli right “to dismantle and destroy any facility in the State of Palestine that is used for the production of prohibited weapons or for other hostile purposes.” Essentially, this turns what was Area A (purportedly under Palestinian security control) into Area B (under Israeli security control) – although the plan doesn’t use these terms. In fact, the Trump plan does away with these failed Oslo-era designations, completely re-drawing the map of Judea and Samaria.

8. Because the plan adopts the principle advanced by Israel of “transportation contiguity” in the West Bank. This means that roads (and railroads, bridges and tunnels) will be built to connect Jewish towns to one another and to connect Palestinian cities and towns to one another. This undoubtedly creates a complicated patchwork for governance in Judea and Samaria, but it is much preferable to the old and impossible demand for “territorial contiguity” which would have meant tearing people out of their homes. The modern infrastructure of roadways also will facilitate gainful employment and economic advancement for all parties.

9. Because Jerusalem remains the undivided and united capital of the State of Israel. The fact that a Palestinian state can claim an “al-Quds” capital city in outlying neighborhoods of the city like Kafr Akab, Abu Dis and eastern Shuafat does not detract from this.

10. Because the Trump plan calls for freedom of religious worship for all faiths on the Temple Mount. This means that without upending the status quo, in which Jordan is guardian of the Temple Mount under Israeli security watch, Jews should incrementally be able to pray there too, I hope.

11. Because the plan treats Palestinians as responsible adults, with no free pass regarding the type of state they might establish. The US demands that a Palestinian government in Judea, Samaria and Gaza end its payments to terrorists, disarm Hamas and other terrorist armies in its midst, end its attempts to brand Israel a war criminal in international courts, end the teaching of genocidal antisemitism in its schools and media, respect human rights, religious freedoms, a free press and more. It must also recognize Israel as the nation-state of the Jewish people. These conditions for American recognition of Palestinian statehood are hard-baked into the plan; and as mentioned above, there is a stopwatch attached to these expectations.

12. Because the plan puts an end to Palestinian delusions of refugee return in order to swamp and destroy Israel from within (what Palestinians call their “right of return”). The refugee matter must be resolved outside of Israel, the plan determines. (This accords with president George W. Bush’s letter to prime minister Ariel Sharon in 2004). The plan holds out tens of billions of dollars for dealing with this across the Middle East and for the building of a robust Palestinian national economy in the West Bank.

13. Because the plan unleashes a regional dynamic whereby Arab states can move toward open partnership with Israel on a wide range of issues. The presence this week of three Arab ambassadors at the White House unveiling event is testament to this, as is the moderately warm support for the plan expressed by Saudi Arabia and Egypt. (Alas, this differs starkly from the cold responses that came from Democratic congressmen, European leaders and left-wing Jewish organizations).

14. Because the plan might nudge Palestinians, inshallah, toward replacement of their rejectionist leadership with men and women who seek peace and prosperity for their people, in partnership with Israel. Younger Palestinians must know that the Palestinian national movement will be marginalized in the Arab world and on the global agenda (and that aid budgets to the PA will dry up) unless they come to the table with new leadership willing to compromise.

15. Because the Trump plan’s parameters closely hew to the broadest political consensus in Israel. It is a peace paradigm that makes eminent sense to at least 75 percent of Israelis, in my estimation, and serves as the basis for national unity (Likud and Blue and White) on a critical foreign and defense policy issue.

Actually, it’s not too different from the Labor Party’s Allon Plan of 50 years ago.

For all these reasons, Jerusalem should act with alacrity to implement the Trump plan and reap its early rewards.


Posted by Mladen Andrijasevic at 9:04 AM