On Islam, Ben Carson Is Right and Charles Krauthammer Is Wrong 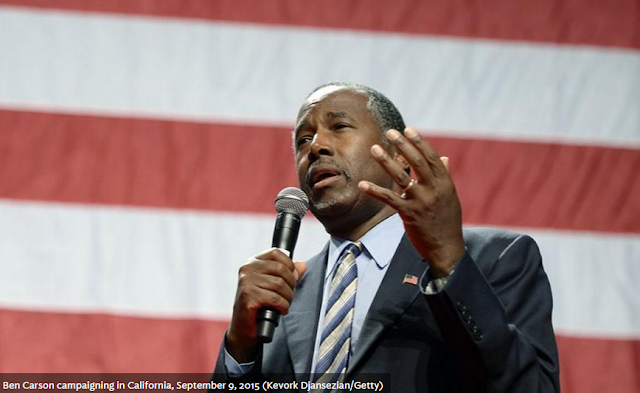 by ANDREW C. MCCARTHY The unique demands of the nation’s highest office conflict with orthodox Islamic teaching. Does Charles Krauthammer get Islam wrong because he gets the Constitution wrong? Or does he get the Constitution wrong because he gets Islam wrong? This conundrum comes to the fore — and not for the first time — after Dr. Krauthammer’s serial denunciations of Dr. Ben Carson. In a Sunday Meet the Press interview, Carson opined that Islam is inconsistent with the United States Constitution and, therefore, that he “would not advocate that we put a Muslim in charge of this nation” — meaning he would not recommend that voters elect a Muslim president.

Dr. K decries Dr. C’s remarks as “morally outrageous,” albeit “sincerely felt.” With Democrats in distress, the columnist fears Republicans are undermining their golden 2016 opportunity: “It is certainly damaging to any party when one of its two front-runners denigrates, however thoughtlessly, the nation’s entire Muslim American community.”

But what loseth a man if he denigrates a tiny community — a large percentage of whose members are Islamists reliably aligned with Democrats — but gains the esteem of a vast political base convinced that Washington is insane on matters Muslim? My great respect for Charles Krauthammer having been oft expressed, I will refrain from the usual throat-clearing. Precisely because he is so influential, and we are in such perilous times, I must dissent from an argument that is constitutionally wayward and, on Islam, willfully blind. To his credit, Krauthammer does not flatly misstate the Constitution, as did some of Carson’s rivals in the GOP nomination chase. Making like a CAIR echo chamber, they frivolously accused Carson of violating the Constitution’s prohibition against establishing a “religious test” for holding public office. (CAIR, the Council on American–Islamic Relations, is a Muslim Brotherhood–created press agent for Islamic supremacism masquerading as a civil-rights group. It predictably called on Carson to withdraw.)

Of course, Carson did not call for the enactment of a law disqualifying Muslims from serving in public office, which is what the religious-test clause actually forbids. He merely offered his personal opinion that it would not be wise for Americans to elect a Muslim president. Krauthammer’s argument is more sophisticated and more dangerous — a bellwether of how progressive constitutional jurisprudence corrupts the thinking of even brilliant conservative analysts. He writes:

The Constitution is not just a legal document. It is a didactic one. It doesn’t just set limits to power; it expresses a national ethos. It doesn’t just tell you what you’re not allowed to do; it also suggests what you shouldn’t want to do.

The Constitution is not a pedagogical tool, teaching us values. It is a legal and political limitation on government’s intrusion into the realm of free thought and action. It is in that realm that we acquire values, knowledge, and common sense. Thus armed, Americans have been taking the belief systems of candidates for public office into account since the Constitution took effect in 1789. There is, moreover, a cottage industry of scholarship on how the religious beliefs of the framers and of presidents have shaped the course of American history. It would defy logic to ignore the patent connection between a candidate’s convictions and how he is likely to govern. Ben Carson did not say Muslims are unfit to hold public office. He said he does not think a Muslim should be president. “Congress,” he elaborated, “is a different story.” He might very well vote for a Muslim to serve in the legislature, with the caveat that it would depend on “who that Muslim is and what their policies are” — same as with anyone “of any faith.” If we are to explore the Constitution as a didactic document, the distinction Carson draws between the presidency and other high offices is worth pondering. It reflects the actual reasoning of the framers — which had nothing to do with keeping faith out of the voting booth. Neither literally nor in spirit does the Constitution forbid automatic disqualifications for the presidency based on an American’s status. Recognizing that they had created a uniquely powerful office the abuse of which could gravely damage or even destroy the republic, the framers took pains to limit eligibility to “natural born” citizens. Is the Constitution trying to teach us that naturalized citizens cannot love our country every bit as much as those fortunate enough to be born here? Of course not. It is drawing a common-sense line.

Because of concerns that apply singularly to the presidency, the Constitution spares the American people the fear that the office could fall into the hands of a person who still feels bonds of loyalty to another sovereign. As related in the Heritage Foundation’s invaluable Guide to the Constitution, John Jay wrote George Washington during the Philadelphia convention to urge that the Constitution “declare expressly that the Commander in Chief of the American army shall not be given to nor devolve on, any but a natural born citizen.” Another iconic American jurist, Joseph Story, later explained that this eligibility requirement “cuts off all chances for ambitious foreigners, who might otherwise be intriguing for the office.”

By contrast, there is no such restriction against naturalized citizens’ serving in Congress, on the federal bench, or in other high offices. The list of those who have done so with patriotic distinction is too long to catalogue. Notice, though, that this fact has never been thought to require removal of the prudential limitation on presidential eligibility. When questions were raised about whether John McCain, Barack Obama, and Ted Cruz were natural-born citizens, they took pains to prove that they were. They did not attack the constitutional requirement as outdated. We don’t get to choose where we are born. One’s belief system, by contrast, is a personal choice by the time one is an adult. Islam is not a foreign nationality, but it is a foreign belief system, core tenets of which are counter-constitutional. So consider this: A person may not be president if he was born in Canada, brought here two weeks later, naturalized as a child, and loves America as the only country he has ever known. Is it really “morally outrageous,” then, to opine that a person should not be president if he has made an adult decision to adhere to a belief system that, in its classical interpretation, runs afoul of the Constitution — even if he is an authentically moderate, pro-American Muslim who, in his own mind, has bleached away these offensive aspects of Islam? Here we arrive at political correctness: the verbal gymnastics by which Krauthammer, like most Washington pols and pundits, consciously avoids Islam’s ills. In condemning Carson on Bill O’Reilly’s Fox News program, he inveighed:

Unless you fancy yourself an Islamic scholar, which I assume Dr. Carson doesn’t, you have to concede that in any religion — Christian, Jewish, Islamic, or whatever — people bring their own interpretation and understanding of that. And again I say, there are a lot of Muslims in America — I don’t know whether it would apply universally — but there is nothing intrinsic in the religion that would make a believer — and there are all stripes of believers in the U.S. and around the world — [inimical] to the Constitution. And if you think that’s true, then I think you’re making a pronouncement on a religion that you are not an expert on.

This is wrong on several levels. Most significantly, it highlights the key error about Islam that American commentators have been making throughout the quarter century of jihad waged against us: Pace Charles, Americans are under no obligation to figure out what is “intrinsic” in Islam — to divine the “true” Islam, if there actually is one. There are sundry interpretations of Islam. Yet, for our limited national-security and liberty-preserving purposes, it is undeniable — except to those who are in terminal denial — that a mainstream interpretation of Islam rejects the foundations of our Constitution, beginning with our core premise that the people are sovereign and may govern themselves irrespective of the totalitarian dictates of sharia. It makes no difference to us whether this mainstream interpretation of Islam is a faithful rendering — much less the faithful rendering. For our purposes, what matters is that many millions of Muslims, rightly or wrongly, adhere to this construction. One need not fancy himself an Islamic scholar to see that it derives from Islamic scripture, although Dr. Krauthammer must know that there is no shortage of globally influential Islamic scholars who vouch for this literalist fundamentalism — see, e.g., Reliance of the Traveller, the classic sharia manual endorsed by the faculty at Cairo’s al-Azhar University (the seat of Islamic learning since the tenth century) and the International Institute of Islamic Thought (the Muslim Brotherhood’s American think tank, whose self-proclaimed mission is “the Islamization of knowledge”).

Krauthammer thus makes another rudimentary error in addressing Islam as if it were a mere “religion,” like any other one. Throughout this column, I have used the term “belief system,” rather than “religion,” advisedly. Islam, in its classical interpretation, is a comprehensive sociopolitical system with its own legal code. Yes, it has some strictly theological tenets (e.g., the oneness of Allah, the conceit that Mohammed is the final prophet). These, however, comprise but a small percentage of Islamic belief, which covers the full extent of political, economic, and social life — from warfare to hygiene, in exacting rules resistant to change. That is why in virtually every Islamic society — i.e., wherever sharia is incorporated into law — the separation of spiritual and political life is rejected; it is why we find misogyny, anti-Semitism, homophobia, ruthless discrimination against religious minorities, hostility to freedom, suspicion of reason, and backwardness in economics and education.

No one is denying that there are millions of Muslims, including scholars, who are repulsed by this interpretation. We are fortunate to have many of them living in our country as solid American citizens — some even serving in the armed forces. But this does not change the facts that (a) many Muslims living in our country adhere to supremacist Islam and (b) those who do not are rightly seen as reformers and modernizers — which is welcome but only underscores that mainstream Islam needs reform and modernizing. What most cries out for reform and modernization are those aspects of Islam that defy the principles of liberty and equality safeguarded by our Constitution. The job is perilous because those who seek to change ingrained aspects of Islam take their lives in their hands. The reformers merit our admiration, and it is in our interest to help them try to succeed. It is also in our interest, though, to realize that they may not succeed, and that we must protect our country in any event. The presidency is also unique because it is the only office for which the Constitution prescribes an oath. The president must swear to “preserve, protect and defend the Constitution of the United States.” Given that a mainstream interpretation of Islam requires Muslims to follow sharia, and that classical sharia is antithetical to our Constitution, there is no moral outrage in recognizing the dilemma the oath could pose for a devout Muslim. There is wisdom, not shame, in concluding that we’d rather not have to worry about the potentially divided loyalties of a Muslim president, just as the Constitution relieves us of worry over the potentially divided loyalties of a foreign-born president. Like naturalized citizens, Muslims can be extraordinary Americans. But until Islam is reformed in such a way that a pluralistic, pro-liberty Islam is the world’s dominant Islam — and Islamic supremacism is the marginal exception, not the all-too-familiar rule — it is perfectly reasonable for Ben Carson, and any other American, to oppose the idea of a Muslim president of the United States. — Andrew C. McCarthy is a policy fellow at the National Review Institute. His latest book is Faithless Execution: Building the Political Case for Obama’s Impeachment.
Posted by Mladen Andrijasevic at 10:24 AM