The Conference That Legalized the Jewish State 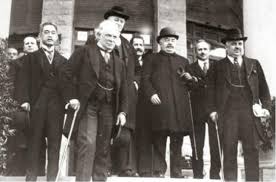 Like so many other aspects of our contemporary culture, historical facts are overlooked in favor of “feelings” and perceived “rights.” In today’s American high schools and universities, teachers are focused on aggrieved minorities, and “victims” of all kinds, rather than on historical truth. For example, many in the media and academia repeatedly herald the victimization of the Palestinian-Arabs. Some professors and media outlets have even inferred that the State of Israel was founded on "stolen” Palestinian land. While others accuse Israel of an illegal “occupation” - a lie that has become an accepted truth.

April 25 marked a significant historical date - unknown by most.  On that date in 1920, members of the League of Nations, the UN predecessor, assembled at the Italian city of San Remo and signed a deed - the first in two millenniums - that granted the Jewish people total and exclusive ownership of the Land of Israel. Leaders of the victorious World War 1 allied countries, including the United States (observer, not a member), Great Britain, France, Italy, and Japan along with 51 other states representing the League of Nations, signed the document.

The ostensible reason for this assembly in San Remo was to deal with the fate of the territories that were once a part of the defeated empires of Germany, Austro-Hungary (Hapsburg Empire), and the Ottoman Turkish Empire.  As a result of dismantling these empires (including the Czarist Russian Empire) new nation states arose in Europe, including Poland (dismantled in 1772 and divided between Russia, Prussia, and Austro-Hungary), Lithuania, Latvia, Estonia, Czechoslovakia, and Yugoslavia. In the case of the Ottoman Empire, vast territories in the Middle East were left with no ownership.

At San Remo, the allied powers dealt with the disposition of the Ottoman territories in the Middle East. The League decided to grant Britain and France a mandate to administer the territories as temporary trusteeships until independent nations could arise. The allies also reaffirmed the pledge contained in the Balfour Declaration of November, 1917, that endorsed the establishment of the Jewish National Home in Palestine. The British delegation to San Remo was led by Prime Minister David Lloyd George and Lord Curzon, who replaced Lord Balfour as foreign minister in 1919. The French delegation expressed reservations about the inclusion of the Balfour Declaration in the peace treaty, but British persuasion settled the issue and the French agreed.

The Conference dealt with two specific documents: the Sykes-Picot Agreement of 1916, between Britain and France, that charted the division of the Middle East between them; and the Balfour Declaration, that declared the establishment of a national home for the Jewish People in the Land of Israel, then called Palestine.

The U.S. Council on Foreign Relations posted the San Remo resolution as such:  “This agreement between post-World War I allied powers (Britain, France, Italy, and Japan) was adopted on April 25, 1920 during the San Remo Conference. The Mandate for Palestine was based on this resolution; it incorporated the 1917 Balfour Declaration and the Covenant of the League of Nation's Article 22. Britain was charged with establishing a "national home for the Jewish people" in Palestine. Territorial boundaries were not decided until four years after. The resolution itself reads: “It was agreed to accept the terms of the Mandates Article as given below with reference to Palestine, on the understanding that there was inserted in the process - verbal undertaking by the Mandatory Power that this would not involve the surrender of the rights hitherto enjoyed by the non-Jewish communities in Palestine…”

The late Howard Grief, an international lawyer and author of The Legal Foundation and Borders of Israel Under International law argued that the San Remo resolution gave the Jewish people exclusive legal and political rights in Palestine. It gave the Arabs the same legal rights in the remainder of the Middle East. Grief wrote, “The Arabs got the lion’s share…I mean they got Syria (the Levant), which was subsequently divided between Syria and Lebanon, they got Mesopotamia, and all of Arabia. This is what Balfour himself said: ‘Why are they complaining? You are getting all these lands, and we are granting a niche – he called it a niche - to the Jewish people who were going to get Palestine.”

According to Grief, the 1920 San Remo resolution superseded later U.N. resolutions. “There is a doctrine in International Law, that once you recognize a certain situation, the matter is executed. You can’t change it. The U.N. General Assembly exceeded its authority, exceeded its jurisdiction. It did not have the power to divide the country.” Grief was referring to the two divisions of historical Mandatory Palestine. The first in 1922 when Britain cut off over 70% of Mandatory Palestine assigned to be the Jewish homeland to create the Emirate of Trans-Jordan and later the Kingdom of Jordan.  The second partition occurred in 1947, when U.N. Resolution 181 partitioned the remaining mandate between Arabs and Jews. The Jews accepted the resolution which suggested a truncated Jewish homeland and they established the State of Israel, while the Arab-Palestinian leaders rejected the resolution which would have given them self-determination and statehood. They chose instead a war to annihilate the Jewish state.

While UN Secretary-General Ban Ki-moon may reference Israeli settlements in Judea and Samaria as “illegal,” Article 6 of the Mandate for Palestine confers on Jews the right to settlement.  It states: “The administration of Palestine, while ensuring that the rights and position of other sections of the population are not prejudiced, shall facilitate Jewish immigration under suitable conditions and shall encourage, in cooperation with the Jewish Agency referred to in Article 4, close settlement by Jews on the land, including state lands and waste lands not required for public purposes.” Article 6 does not exclude Jewish settlement in the West Bank or anywhere else under the Mandate. Moreover, UN resolution 242 (1967) conditioned Israel relinquishing territories (not all) in exchange for peace. Since there has been Palestinian terror rather than peace, Israel remains as the legitimate administrator of the West Bank territories.

Former U.S. Secretary of State Madeleine Albright, following a UN Security Council meeting on March 18, 1994, notably remarked, "We simply do not support the description of the territories occupied by Israel in the 1967 war as "occupied Palestinian territory". In the view of my Government, this language could be taken to indicate sovereignty; a matter which both Israel and the PLO have agreed must be decided in negotiations on the final status of the territories. As agreed between them, those negotiations will begin no later than two years after the implementation of the Declaration of Principles.”

The quote, often attributed to Nazi Germany’s Propaganda Minister Josef Goebbels, “If you tell a lie big enough and keep repeating it, people will eventually come to believe it" is as applicable today as then.  The Arab-Palestinians and their western supporters in academia and the media have been repeating the mantras of “stolen” Palestinian land, and “illegal occupation” for such a long time, that many in the world, including Ban Ki-moon, have apparently come to accept it, if not believe in it. The San Remo resolution of April 25, 1920 is a reminder of an undeniable truth.

“Mandate for Palestine” - The Legal Aspects of Jewish Rights to a National Home in Palestine
Posted by Mladen Andrijasevic at 10:21 PM