Using a live chess theory approach, we can identify Iran’s strategic moves in real time and examine what are its goals. Ultimately, the most important question is: Will Tehran use nuclear weapons? 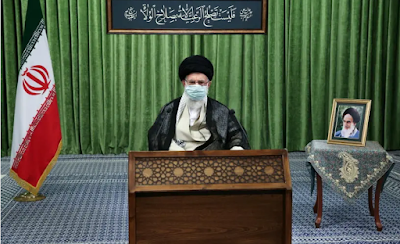 With its economy on the brink of collapse, the survival of the Islamic regime in Tehran might depend on a new deal with the United States and the West. Iran’s proxy war, making use of Hamas and Hezbollah, against Israel, is a critical tool to pressure the West to acquiesce to the demands of the Islamic Republic. These include a complete opening of their economy to the world markets and the acceptance of their nuclear and ballistic missile programs.

Using a live chess theory approach that studies chess strategies, openings, and historical games between grandmasters, we can identify Iran’s strategic moves in real time and examine what are its goals and whether it is a rational actor. Ultimately, the most important question is this: Will Tehran use nuclear weapons?

Unlike artificial intelligence (AI), which is an analytical process, chess is a systemic process. AI is built on mimicking human cognitive ability with the aid of supercomputing, extrapolating infinite scenario options. Chess relies on unique human choices for each move that may or may not involve intuition and self-awareness.

A recent article said the 2021 Israeli-Palestinian crisis was the first war with supercomputing and AI. Israeli systems used AI to make highest-value target recommendations for military intelligence. Another system mapped the terrain in Gaza and was able to identify in real time changes that would indicate live launch sites. Yet another utilized field information to alert Israeli troops of possible imminent attacks.

Brig. Gen. Yosef Kuperwasser, a former head of the Research Division of the Israel Defense Forces Military Intelligence Directorate, in a groundbreaking paper published by the Brookings Institution, supported the use of Systemic Thinking (of which chess analysis is an example) as a geopolitical and military intelligence analytical tool. “Systemic Thinking,” Kuperwasser wrote, “allowed analysts to offer more rounded intelligence estimates and produce a holistic intelligence product by better understanding the way arenas develop and increasing focus on the cultural surroundings of a subject (ideology, religion, public opinion, psychology, literature, and arts).”

Chess is about controlling the center, gaining spatial advantage, and protecting the king – all concepts that can be applied to the Israel-Iran conflict. Nothing in chess is random; all pieces have only one objective: to serve the king (the regime). As the game progresses, pieces are sacrificed for the greater good. Unless the players agree to a draw, a tie, the game is over when the attacking player declares to the opponent “checkmate,” from the Persian shah mat: the king is dead.

I spoke at length with former Iranian chess champions and asked them to analyze the Islamic Republic’s geopolitical moves through the lens of chess openings and strategies. All spoke freely on condition of anonymity out of concern for the safety of their families that still reside in Iran.

In the geopolitical chess game between Iran and Israel, Iran is playing white and is on the offense. In chess parlance, Iran is playing a Queen’s Gambit. A gambit is a chess opening that dangles a piece, daring you to take it. The Queen’s Gambit temps the opponent into allocating important resources atop each other, restricting their movements. It is not unlike the Battle of Thermopylae, where the Spartans were trapped in a mountain pass.

The Iranians will continue to sacrifice Hamas, as well as Hezbollah, when it suits them to achieve a strategic imbalance. Loyalty, after all, is to the king; it is not asked of the king.

When the Queen’s Gambit is played, even the queen herself can be sacrificed. According to a former family member of Iran’s ruling elite who served under Shah Mohammad Reza Pahlavi and then briefly under the Islamic regime, the Islamic regime did exactly this when it “sacrificed” Gen. Qasem Soleimani, IRGC Quds Force major-general. Articles in Time and the Atlantic Council both point to the lack of a substantial Iranian retaliation for his “martyrdom” and the potential benefits of Soleimani's death to the regime – providing a rallying point for the people and eliminating a potential internal threat for the clerics who wish to control the transfer of power when Supreme Leader Ayatollah Ali Khamenei dies.

Israel is playing black, on defense, and has declined Iran’s gambit. The Jewish State is playing a version of the transposed Sicilian Defense, whose main goal is to pressure white’s center. It does this by sacrificing a position on the periphery while attacking and holding a critical space in the center. Israel, knowing Iran has a space advantage that cannot be overcome, is playing Sicilian to counter and execute deep attacks into enemy territory. This is strategic subterfuge in seeking to place an attacking piece deep into enemy territory where it can cause chaos. Black’s goal with the Sicilian Defense is to bring imbalanced and asymmetrical positions onto the chessboard and maintain this imbalance.

Chess is about controlling space, attacking weak squares, and gaining control over other open squares. Iran can produce insane complications, create a lot of tactical possibilities to surprise Israel, and get into a long, drawn-out endgame if Israel does not finish the job in the middle game. If Israel would have been entrenched fighting in Gaza, Iran’s next move would have been for Hezbollah to fire its missiles into Israel, opening a third front and wreaking havoc.

Chess purists reading this will revolt. Iran and Israel are playing parallel games. In an actual game of chess, the Sicilian Defense cannot be played against the Queen’s Gambit. Geopolitics is not limited by the 64 squares and the time clock of a standard game of chess.

During the Cold War, chess theory demonstrated that the former Soviet Union was extremely unlikely to launch nuclear weapons. In Russian (Soviet) chess, the draw is a valued strategic tool. The same chess theory tells us quite a different story regarding the Islamic Republic in Tehran that will sacrifice anything and anyone to stay in power.

In chess, a space advantage allows a player to take strategic risks; it makes affordable the consequences of the opponent’s counter.

American constitutional and criminal law professor Alan Dershowitz frequently tells an anecdote about the late Iranian President Akbar Hashemi Rafsanjani that illustrates a classic implementation of the centrality of space in chess theory. Rafsanjani, considered a relative moderate, once told an American journalist that if Iran launched a strategic nuclear strike on Israel, it would “kill as many as 5 million Jews,” and that if Israel retaliated, it would kill 15 million Iranians. This, Rafsanjani says in Dershowitz’s telling, would be “a small sacrifice from among the billion Muslims in the world. … It is not irrational to contemplate such an eventuality.”

Zaq Harrison is an entrepreneur with over 30 years of experience in the private and nonprofit sectors. Harrison writes on topics ranging from global real estate analysis to pre-IPO evaluation of ridesharing firms to foundational causes of the global financial crises of 2008 to free-market societal responsibilities in the 21st century

Posted by Mladen Andrijasevic at 11:36 PM