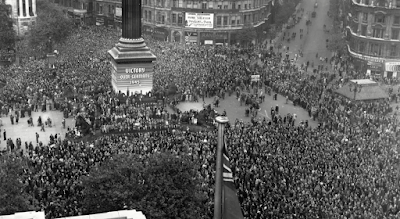 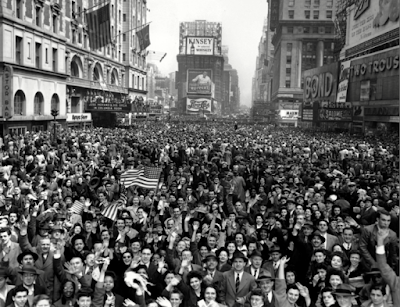 The Russians would not for 44 years broadcast the 1966 interview with Marshal Zhukov, the man who along with Winston Churchill is most to be thanked for defeating the Nazis in WWII.  He had saved the USSR at Moscow, Leningrad and Stalingrad and yet they would not let the public hear what he had to say about October 1941. In the interview Zhukov explained that when he visited the area there were hardly any Soviet troops there and had the Germans continued their advance they would have taken Moscow.

Unfortunately, I could not find a video with English subtitles, so only for Russian speakers.

He held the line at Moscow, fought off the Germans at Stalingrad and rode a white horse at the victory parade as Soviet troops threw Nazi banners at the feet of Joseph Stalin. But for decades the achievements of the most celebrated of Stalin’s generals were quietly airbrushed from Soviet history.

Now a film banned by the Kremlin and kept secret for more than 40 years has provided an insight into the wartime exploits of Marshal Georgy Zhukov, the military commander who led the fight against Hitler, and how close the Soviet Union came to defeat.

The interview with Zhukov was recorded in 1966 but was ordered to be destroyed because of its frank assessment of the disorganised state of the Red Army’s defences as the Nazis approached Moscow. The disclosure contradicted official propaganda about Stalin’s leadership during what Russians call the Great Patriotic War.

A single archive copy was preserved secretly by the father of the television journalist Vladimir Pozner, who broadcast the interview on state-run Channel One yesterday. It was a further sign that President Medvedev is encouraging a more honest assessment of Stalin before Victory Day celebrations on May 9, marking the 65th anniversary of the end of the war. He ordered the publication of documents last week showing that Stalin had approved the massacre of 22,000 Polish prisoners at Katyn in 1940.

Zhukov, who reviewed the first victory parade in Red Square on a white horse in 1945, did not mention Stalin as he explained how the Nazis were halted, saying that the Wehrmacht had “overestimated themselves and underestimated Soviet troops”.

The most dangerous week, he said, had been in October 1941 at the Mozhaisk defence line on the outskirts of Moscow. Stalin had summoned him to the Kremlin as the situation grew more desperate.

“Stalin was sick with the flu but was working,” Zhukov told the Soviet writer Konstantin Simonov. “He showed the map of the front and said, ‘look how the situation has turned out on the Western front. I cannot get hold of a single clear report about what is happening at the moment. Where are our troops?’.” Zhukov went to the front line and found “absolutely insufficient” defences. “It was an extremely dangerous situation. In essence, all the approaches to Moscow were open.

“Our troops could not have stopped the enemy if he moved on Moscow. I telephoned Stalin. I said the most urgent thing is to occupy the Mozhaisk defence line as in parts of the Western front in essence there are no [Soviet] troops.” Stalin called back and named him commander of the Western front.

Zhukov admitted that the generals had had doubts about their ability to prevent the Nazis taking the capital.

“Did the commanders have confidence we would be able to halt the enemy? I have to say, frankly, that we did not have complete certainty. It would have been possible to contain the initial units of the opponent but if he quickly sent in his main group, he would have been difficult to stop.” Secret orders had been issued to prepare a rearguard defence of Moscow in case the Germans broke through.

Despite Zhukov’s formidable reputation, the film presents him as a modest man keen to present the war as a triumph for ordinary people determined to defend their homeland and its capital against the invader.

“Every soldier, every officer, every general who took part in the fighting could never forget such a difficult war,” he told his interviewer at one stage. “But more than anything I remember the battle for Moscow. We perfectly understood what it meant and I remember the smallest detail even now. Moscow was the hardest trial.”

Zhukov became the most decorated officer in the Red Army and the only general to be awarded the Hero of the Soviet Union four times. He was present at the Nazi surrender in Berlin and was made military governor of the Soviet occupation zone in Germany.

Stalin resented his popularity and moved him to outposts in Odessa and the Urals. He was made Defence Minister soon after Stalin’s death and was buried in the Kremlin Wall after his own death in 1974.

Mr Pozner said that Soviet authorities ordered the interview to be destroyed “because Zhukov told the truth”. He added: “I believe that everyone who took part in the war has the right to know the truth about the war.”

Rise and fall
· Born in 1896. As a youth Zhukov was a furrier’s apprentice before being conscripted in 1915 into the cavalry of the Imperial Army

· Fought for the Red Army after the 1917 Revolution, winning praise from its commissar, Joseph Stalin

· Defeated Japan at the Battle of Khalkin-Gol in 1939 and was made a Hero of the Soviet Union, an honour conferred on him three more times

· In 1941 inflicted the first big defeat on the Wehrmacht

· Defeated the Germans at Stalingrad in 1942 and at Kursk in 1943. Led the final assault on Germany

· Sidelined by Stalin after the war and sent to command the Odessa district, in present-day Ukraine

· Briefly returned to favour after Stalin’s death in 1955 but dismissed by Nikita Khrushchev in 1957. Rehabilitated again, briefly, in 1964, but never served in office again after that.

Several books on WWII I would recommend:

Posted by Mladen Andrijasevic at 12:01 PM