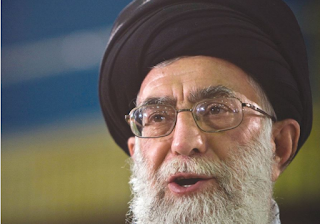 BY GABRIEL ROSENBERG
The Islamic Republic of Iran is the world’s largest state sponsor of terrorism, is governed by an apocalyptic radical Islamic regime and is expanding its presence and influence across the Middle East by the use of intimidation, aggression and terrorism. Still, many in the West have been eager to re-engage with Iran in terms of trade and sanctions relief.

Fortunately, thanks to a new administration in the White House and a renewed sense of urgency among the Sunni Arab states, the Iranian threat is back at the top of the international agenda. These positive developments have created the right conditions for more countries, especially within the EU, to understand the true nature of the Iranian regime, the threat it poses to the world, and ultimately deal with it in accordance with reality instead of wishful thinking.

The regime that controls Iran with an iron fist, led by Ayatollah Khamenei, is guided by the Shi’ite version of Islamism. Islamism is a political ideology with roots in Muslim scriptures that calls for the destruction of Western society and the establishment of Sharia law (Islamic law) worldwide.

While Sunni Islamism generally calls for the incremental implementation of Sharia worldwide, many within Shi’ite Islam believe that when the world is on the verge of destruction the Twelfth Imam, the Shi’ite messiah, will suddenly return to rule the world through a worldwide Islamic caliphate. The prophecy does not specify who should be responsible for the destruction and therefore the Iranian regime may take it upon themselves to create the right conditions for the return of their messiah.

For Ayatollah Khamenei and many other leaders in Iran, this religious prophecy is not just about faith but rather their main guide when it comes to implementing policy. This conviction is the reason they enforce Sharia with such ruthlessness domestically and why they have spent hundreds of billions of dollars on terrorism abroad instead of investing in their own population.

Implementing this doomsday ideology goes far beyond rhetoric and even policy, it is their raison d’être.

Hence, when Iranians chant “Death to America” and call to wipe Israel “off the map,” it would be in the best interest of the West to take them more seriously, even literally. This prophecy is so deep-rooted in Iranian culture that their leaders have stated publicly that they are willing to let millions of their own people die in order to fulfill it. This was infamously expressed by former Iranian president Akbar Hashemi Rafsanjani who in 2001 said that a nuclear bomb “would not leave anything in Israel but the same thing would just produce damages in the Muslim world.”

It is imperative for the West to realize that this is not empty rhetoric; it is their ideology, policy and conviction.

For the Iranian regime (and other Islamists) death is not the end – dying for Allah is the ultimate victory, the ultimate achievement of one’s life.

Aside from downplaying the Iranian regime’s ideology, most Western countries have yet to realize the severity of the threat that Iran poses and instead focus on the much less significant threat posed by the Islamic State (ISIS). While ISIS has managed to conduct and inspire recent terrorist attacks on Western soil, Iran is a vastly greater threat as its economy is several hundred times larger, it has a tremendously more advanced army with intercontinental ballistic missiles, an air force and a navy, and is on the path to developing nuclear weapons.

Furthermore, Iran is indirectly in control of four other governments in the Middle East, in Syria, Lebanon, Iraq and Yemen, and has a global terrorism network that operates in over 30 countries across all continents. Just one of its terrorist proxies, Hezbollah, currently has a stockpile of over 130,000 rockets, more than the combined arsenal of all 28 NATO countries, with the exception of the US.

While their ideologies are very similar, the capabilities of ISIS pale in comparison to the Islamic Republic of Iran.

Those in the West who believe that engagement with Iran will lead to moderation fundamentally misunderstand the nature of the regime. Nothing illustrates this better than Iran’s behavior since signing the catastrophic nuclear deal in 2015. The nuclear deal awarded Iran enormous financial benefits and re-engagement with the international community in return for an unverified pause in parts of its nuclear program. Since the nuclear deal Iran’s executions and human rights abuses have reached record levels, funding for terrorism and military spending have increased, it has become more aggressive in the region, accelerated the development of ballistic missiles, and is well on its way to establishing a land corridor from Tehran to the Mediterranean.

Because of the new US administration, the renewed sense of urgency among Sunni Arab states, and because more Western countries are starting to take the threat of radical Islamic terrorism more seriously, the time is ripe to get the EU and other countries on board to at last treat Iran as the devastating threat to the world it truly is.

The civilized and democratic world cannot afford to continue with its double standards of claiming to fight terrorism while at the same sponsoring the Iranian regime through increased trade and sanctions relief with a fatally false sense of hope that it will improve its behavior.

The author is a member of the Jewish Diplomatic Corps, a flagship program of the World Jewish Congress, and a board member of the Zionist Federation of Sweden. Follow him on Twitter: @GabRosenberg.

Posted by Mladen Andrijasevic at 10:07 PM