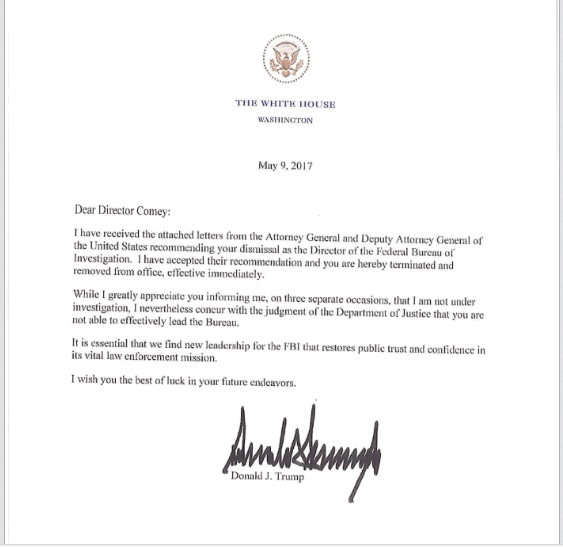 Trump wrote Dear Director Comey and then he fired him. I guess it costs nothing to be polite. Reminds me of Churchill declaring war on Japan (and of course, that is where the comparison ends):

Sir,
On the evening of December 7th His Majesty's Government in the United Kingdom learned that Japanese forces without previous warning either in the form of a declaration of war or of an ultimatum with a conditional declaration of war had attempted a landing on the coast of Malaya and bombed Singapore and Hong Kong.
In view of these wanton acts of unprovoked aggression committed in flagrant violation of International Law and particularly of Article I of the Third Hague Convention relative to the opening of hostilities, to which both Japan and the United Kingdom are parties, His Majesty's Ambassador at Tokyo has been instructed to inform the Imperial Japanese Government in the name of His Majesty's Government in the United Kingdom that a state of war exists between our two countries.
I have the honour to be, with high consideration,

Of the letter, Churchill later wrote: "Some people did not like this ceremonial style. But after all when you have to kill a man it costs nothing to be polite."[2]
Posted by Mladen Andrijasevic at 8:54 PM