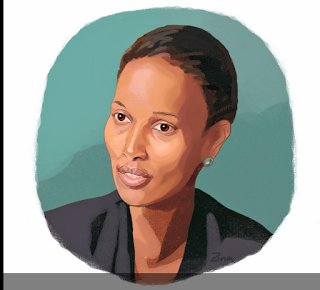 The West’s obsession with ‘terror’ has been a mistake, she argues. Dawa, the ideology behind it, is a broader threat.

The woman sitting opposite me, dressed in a charcoal pantsuit and a duck-egg-blue turtleneck, can’t go anywhere, at any time of day, without a bodyguard. She is soft-spoken and irrepressibly sane, but also—in the eyes of those who would rather cut her throat than listen to what she says—the most dangerous foe of Islamist extremism in the Western world. We are in a secure room at a sprawling university, but the queasiness in my chest takes a while to go away. I’m talking to a woman with multiple fatwas on her head, someone who has a greater chance of meeting a violent end than anyone I’ve met (Salman Rushdie included). And yet she’s wholly poised, spectacles pushed back to rest atop her head like a crown, dignified and smiling under siege.

Ayaan Hirsi Ali, born in Somalia in 1969, is Islam’s most eloquent apostate. She has just published a slim book that seeks to add a new four-letter word—dawa—to the West’s vocabulary. It describes the ceaseless, world-wide ideological campaign waged by Islamists as a complement to jihad. It is, she says, the greatest threat facing the West and “could well bring about the end of the European Union as we know it.” America is far from immune, and her book, “The Challenge of Dawa,” is an explicit attempt to persuade the Trump administration to adopt “a comprehensive anti-dawa strategy before it is too late.”

Ms. Hirsi Ali has come a long way from the days when she—“then a bit of a hothead”—declared Islam to be incapable of reform, while also calling on Muslims to convert or abandon religion altogether. That was a contentious decade ago. Today she believes that Islam can indeed be reformed, that it must be reformed, and that it can be reformed only by Muslims themselves—by those whom she calls “Mecca Muslims.” These are the faithful who prefer the gentler version of Islam that she says was “originally promoted by Muhammad” before 622. That was the year he migrated to Medina and the religion took a militant and unlovely ideological turn.

At the same time, Ms. Hirsi Ali—now a research fellow at Stanford’s Hoover Institution, where I also work—is urging the West to look at Islam with new eyes. She says it must be viewed “not just as a religion, but also as a political ideology.” To regard Islam merely as a faith, “as we would Christianity or Buddhism, is to run the risk of ignoring dawa, the activities carried out by Islamists to keep Muslims energized by a campaign to impose Shariah law on all societies—including countries of the West.”

Dawa, Ms. Hirsi Ali explains, is “conducted right under our noses in Europe, and in America. It aims to convert non-Muslims to political Islam and also to push existing Muslims in a more extreme direction.” The ultimate goal is “to destroy the political institutions of a free society and replace them with Shariah.” It is a “never-ending process,” she says, and then checks herself: “It ends when an Islamic utopia is achieved. Shariah everywhere!”

Ms. Hirsi Ali contends that the West has made a colossal mistake by its obsession with “terror” in the years since 9/11. “In focusing only on acts of violence,” she says, “we’ve ignored the Islamist ideology underlying those acts. By not fighting a war of ideas against political Islam—or ‘Islamism’—and against those who spread that ideology in our midst, we’ve committed a blunder.”

There is a knock on the door. I hear hushed voices outside, presumably her bodyguard telling someone to come back later. To add to the mildly dramatic effect, a siren is audible somewhere in the distance, unusual for the serene Stanford campus. Ms. Hirsi Ali is unfazed. “What the Islamists call jihad,” she continues, “is what we call terrorism, and our preoccupation with it is, I think, a form of overconfidence. ‘Terrorism is the way of the weak,’ we tell ourselves, ‘and if we can just take out the leaders and bring down al Qaeda or ISIS, then surely the followers will stop their jihad.’ But we’re wrong. Every time Western leaders take down a particular organization, you see a different one emerge, or the same one take on a different shape. And that’s because we’ve been ignoring dawa.”

Ms. Hirsi Ali wants us to get away from this game of jihadi Whac-A-Mole and confront “the enemy that is in plain sight—the activists, the Islamists, who have access to all the Western institutions of socialization.” She chuckles here: “That’s a horrible phrase . . . ‘institutions of socialization’ . . . but they’re there, in families, in schools, in universities, prisons, in the military as chaplains. And we can’t allow them to pursue their aims unchecked.”

America needs to be on full alert against political Islam because “its program is fundamentally incompatible with the U.S. Constitution”—with religious pluralism, the equality of men and women, and other fundamental rights, including the toleration of different sexual orientations. “When we say the Islamists are homophobic,” she observes, “we don’t mean that they don’t like gay marriage. We mean that they want gays put to death.”

Islam the religion, in Ms. Hirsi Ali’s view, is a Trojan horse that conceals Islamism the political movement. Since dawa is, ostensibly, a religious missionary activity, its proponents “enjoy a much greater protection by the law in free societies than Marxists or fascists did in the past.” Ms. Hirsi Ali is not afraid to call these groups out. Her book names five including the Council on American-Islamic Relations, which asserts—and in turn receives in the mainstream media—the status of a moderate Muslim organization. But groups like CAIR, Ms. Hirsi Ali says, “take advantage of the focus on ‘inclusiveness’ by progressive political bodies in democratic societies, and then force these societies to bow to Islamist demands in the name of peaceful coexistence.”

Her strategy to fight dawa evokes several parallels with the Western historical experience of radical Marxism and the Cold War. Islamism has the help of “useful idiots”—Lenin’s phrase—such as the Southern Poverty Law Center, which has denounced Ms. Hirsi Ali as an “extremist.” She sees that smear as a success for dawa: “They go to people like the SPLC and say, ‘Can we partner with you, because we also want to talk about what you guys talk about, which is civil rights. And Muslims are a minority, just like you.’ So, they play this victim card, and the SPLC swallows it. And it’s not just them, it’s also the ACLU. The Islamists are infiltrating all these institutions that were historic and fought for rights. It’s a liberal blind spot.”

Western liberals, she says, are also complicit in an Islamist cultural segregation. She recalls a multiculturalist catchphrase from her years as a Somali refugee in Amsterdam in the early 1990s: “ ‘Integrate with your own identity,’ they used to tell us—Integratie met eigen identiteit. Of course, that resulted in no integration at all.”

Ms. Hirsi Ali wants the Trump administration—and the West more broadly—to counter the dawa brigade “just as we countered both the Red Army and the ideology of communism in the Cold War.” She is alarmed by the ease with which, as she sees it, “the agents of dawa hide behind constitutional protections they themselves would dismantle were they in power.” She invokes Karl Popper, the great Austrian-British philosopher who wrote of “the paradox of tolerance.” Her book quotes Popper writing in 1945: “If we extend unlimited tolerance even to those who are intolerant, if we are not prepared to defend a tolerant society against the onslaught of the intolerant, then the tolerant will be destroyed, and tolerance with them.”

I ask Ms. Hirsi Ali what her solution might be, and she leans once more on Popper, who proposed a right not to tolerate the intolerant. “Congress must give the president—this year, because there’s no time to lose—the tools he needs to dismantle the infrastructure of dawa in the U.S.” Dawa has become an existential menace to the West, she adds, because its practitioners are “working overtime to prevent the assimilation of Muslims into Western societies. It is assimilation versus dawa. There is a notion of ‘cocooning,’ by which Islamists tell Muslim families to cocoon their children from Western society. This can’t be allowed to happen.”

Is Ms. Hirsi Ali proposing to give Washington enhanced powers to supervise parenting? “Yes,” she says. “We want these children to be exposed to critical thinking, freedom, the Constitution, the Bill of Rights, the rights of women.” She also suggests subjecting immigrants and refugees to ideological scrutiny, so as to deny entry, residence and naturalization to those “involved with, or supportive of, Islamism.”

In effect, Ms. Hirsi Ali would modernize the “communism test” that still applies to those seeking naturalization. “I had to answer questions when I applied for citizenship in 2013: ‘Are you, or have you ever been, a communist?’ And I remember thinking, ‘God, that was the war back then. We’re supposed to update this stuff!’ Potential immigrants from Pakistan or Bangladesh, for instance, should have to answer questions—‘Are you a member of the Jamat?’ and so on. If they’re from the Middle East you ask them about the Muslim Brotherhood, ‘or any other similar group,’ so there’s no loophole.”

Might critics deride this as 21st-century McCarthyism? “That’s just a display of intellectual laziness,” Ms. Hirsi Ali replies. “We’re dealing here with a lethal ideological movement and all we are using is surveillance and military means? We have to grasp the gravity of dawa. Jihad is an extension of dawa. For some, in fact, it is dawa by other means.”

The U.S., she believes, is in a “much weaker position to combat the various forms of nonviolent extremism known as dawa because of the way that the courts have interpreted the First Amendment”—a situation where American exceptionalism turns into what she calls an “exceptional handicap.” Convincing Americans of this may be the hardest part of Ms. Hirsi Ali’s campaign, and she knows it. Yet she asks whether the judicial attitudes of the 1960s and 1970s—themselves a reaction to the excesses of Joseph McCarthy in the 1950s—might have left the U.S. ill-equipped to suppress threats from groups that act in the name of religion.

I ask Ms. Hirsi Ali if there’s any one thing she would wish for. “I would like to be present at a conversation between Popper and Muhammad,” she says. “Popper wrote about open society and its enemies, and subjected everyone from Plato to Marx to his critical scrutiny. I’d have liked him to subject Muhammad’s legacy to the same analysis.

The Challenge of Dawa: Political Islam as Ideology and Movement and How to Counter It by Hoover Institution on Scribd


A quote from Ayaan Hirsi Ali’s new book, "The Challenge of Dawa", on immigration:

“The administration, through the Department of Homeland Security (DHS), should subject immigrants and refugees to ideological scrutiny, as happened during the Cold War.

Individuals requesting temporary entry to the United States, permanent residency, or citizenship must be asked about their commitment to Islamism and related concepts such as the death penalty for apostasy and support for sharia law and the subjugation of women. If individuals are found to have lied in their immigration or citizenship applications about their commitment to the US Constitution by engaging in subversive dawa activities after establishing residency, their residency or citizenship must be revoked."

I hope President Trump takes note that the emphasis is on ideological scrutiny.
Posted by Mladen Andrijasevic at 10:14 PM