Forget peace talks. Work on building an alliance of moderates and modernizers. 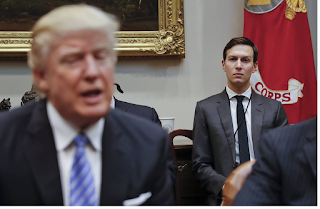 Jared Kushner will get his first real taste of Mideast diplomacy this week, when his father-in-law receives Israeli Prime Minister Benjamin Netanyahu at the White House. Since the 36-year-old former newspaper publisher has been widely touted as the administration’s point man on Israeli-Arab issues, this week’s column humbly offers four rules Mr. Kushner ought to observe in the months and years ahead.

(1) The Clifford Rule. After stepping down as Lyndon Johnson’s defense secretary in 1969, the late Clark Clifford settled into the life of a Washington superlawyer—the sort of man who, for a price, could open all the right doors for his clients and fix some of their worst problems.

Approached by a man with one such problem, Clifford considered the matter, then advised: “Do nothing.”

Two days later, the man got a bill from Clifford for $10,000. Infuriated that such seemingly simple advice would cost so whopping a sum, he marched into Clifford’s office to remonstrate.

The moral of this (perhaps apocryphal) story is that “do nothing” is often the best advice—and that failing to heed it can cost you dearly.

Had John Kerry adopted the Clifford Rule, he might have been spared his fruitless yearlong foray into Israeli-Palestinian peace talks, which led to the 2014 Gaza War. Had Condoleezza Rice adopted it, she might not have advocated Palestinian elections that led to victory for Hamas in 2006. Had Bill Clinton taken it, he might have been spared the diplomatic humiliation of being spurned by Yasser Arafat at Camp David in 2000.

(2) The Kissinger Rule. If “do nothing” is generally good advice, what’s Mr. Kushner supposed to do?

Henry Kissinger once observed that “when enough bureaucratic prestige has been invested in a policy, it is easier to see it fail than to abandon it.” So it is with the formulas that govern official U.S. thinking toward the Arab-Israeli conflict: “land for peace” and the “two-state solution.” The State Department has been rolling those boulders up the hill for 50 years, and still it thinks one last push will do the trick.

The Kissinger Rule disposes with the futility. It says that if you can’t solve a small problem, fix the larger one that encompasses it. So it was with Taiwan and the “One China” policy, or with Egypt and its post-1973 realignment with the U.S.

For Mr. Kushner, that means the goal of diplomacy isn’t to “solve” the Palestinian problem. It’s to anesthetize it through a studied combination of economic help and diplomatic neglect. The real prize lies in further cultivating Jerusalem’s ties to Cairo, Riyadh, Amman and Abu Dhabi, as part of an Alliance of Moderates and Modernizers that can defeat Sunni and Shiite radicals from Raqqa to Tehran. The goal should be to make Palestinian leaders realize over time that they are the region’s atavism, not its future.

(3) The Bush Rule. In 2004, George W. Bush and then-Prime Minister Ariel Sharon exchanged letters in which the president acknowledged that the world had changed since 1967.

“In light of new realities on the ground, including already existing major Israeli populations centers,” Mr. Bush wrote, “it is unrealistic to expect that the outcome of final status negotiations will be a full and complete return to the armistice lines of 1949.”

The point of the Bush Rule is to dispose with the flimflam that the Mideast’s contrived borders are sacred. And the best place Mr. Kushner could put the Bush Rule to use is to offer U.S. recognition of Israeli sovereignty over the Golan Heights, captured in 1967 from Syria.

The benefits: Nobody there, including 20,000 Druze, wants to be ruled by Damascus. U.S. recognition would put the Assad regime and its Iranian and Russian backers on notice that there’s a price for barbaric behavior. And it gives the administration an opportunity to demonstrate its pro-Israel bona fides while exerting a restraining influence on settlement building in the West Bank.

(4) The Shultz Rule. Ronald Reagan’s secretary of state held to a clear principle when it came to negotiating with tough adversaries: Establish a reasonable position, announce your bottom line, stick to it. No haggling. It proved effective in dealing with Soviet arms negotiators.

The overworked metaphor for Mideast diplomacy is the bazaar. The secret to not losing one’s shirt is not to enter the bazaar in the first place.

The U.S. cannot solve the Israeli-Palestinian conflict; only Palestinians can. The U.S. does have an interest in strengthening ties between its allies, both for their own sake and to counter their common enemies. If the Palestinians want to be a part of the solution, so much the better. If they want to continue to be a part of the problem, they can live with the consequences.

The principles are straightforward. The courage to stick to them will be the test of Mr. Kushner’s diplomatic mettle.

Do nothing, because there indeed is nothing you can do. Why is that?

Posted by Mladen Andrijasevic at 10:12 PM