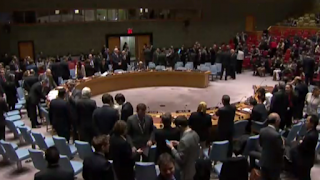 Melanie Philllips explains the reason for the unprecedented rebuke to the Obama administration over the Israel-bashing speech by US Secretary of State John Kerry on Thursday  this way:

“So why the screeching U-turn? Almost certainly it was because of the ferocious pushback from both Israel and US President-elect Donald Trump which presumably made Mrs May realise she had created a diplomatic crisis between the UK and its two ostensible allies.”

Melanie Phillips is right, but there is an additional reason, explained by Charles Krauthammer in his column:

“It’s the third category of “settlement” that is the most contentious and that Security Council Resolution 2334 explicitly condemns: East Jerusalem. This is not just scandalous; it’s absurd. America acquiesces to a declaration that, as a matter of international law, the Jewish state has no claim on the Western Wall, the Temple Mount, indeed the entire Jewish Quarter of Jerusalem. They belong to Palestine.”

We have come to the point where world animosity towards Israel has morphed into UN resolutions that have become so absurd that this absurdity is the very proof that they are wrong.

In logic, reductio ad absurdum (Latin for "reduction to absurdity"; or argumentum ad absurdum, "argument to absurdity") is a form of argument which attempts either to disprove a statement by showing it inevitably leads to a ridiculous, absurd, or impractical conclusion, or to prove one by showing that if it were not true, the result would be absurd or impossible

Almost everybody in the West gets carried away by attacking Israel.  It has become a Pavlovian reflex.  However, logical thinking is still an important component of western thought and when mathematical absurdity stares you in the face even the dumbest take notice.

Reductio ad absurdum works in math (Here is a link to why the square root of 2 is irrational) . It works in politics too.
Posted by Mladen Andrijasevic at 12:13 AM