Krauthammer: The price of powerlessness 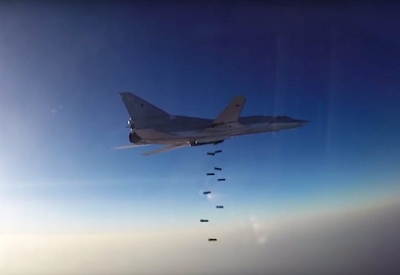 This week Russian bombers flew out of Iranian air bases to attack rebel positions in Syria. The State Department pretended not to be surprised. It should be. It should be alarmed. Iran’s intensely nationalistic revolutionary regime had never permitted foreign forces to operate from its soil. Until now.

The reordering of the Middle East is proceeding apace. Where for 40 years the U.S.-Egypt alliance anchored the region, a Russia-Iran condominium is now dictating events. That’s what you get after eight years of U.S. retrenchment and withdrawal. That’s what results from the nuclear deal with Iran, the evacuation of Iraq and utter U.S. immobility on Syria. Consider:

The nuclear deal was supposed to begin a rapprochement between Washington and Tehran. Instead, it has solidified a strategic-military alliance between Moscow and Tehran. With the lifting of sanctions and the normalizing of Iran’s international relations, Russia rushed in with major deals, including theshipment of S-300 ground-to-air missiles. Russian use of Iranian bases now marks a new level of cooperation and joint power projection.

These bombing runs cross Iraqi airspace. Before President Obama’s withdrawal from Iraq, that could not have happened. The resulting vacuum has not only created a corridor for Russian bombing, it has gradually allowed a hard-won post-Saddam Iraq to slip into Iran’s orbit. According to a Baghdad-based U.S. military spokesman, there are 100,000 Shiite militia fightersoperating inside Iraq, 80 percent of them Iranian-backed.

When Russia dramatically intervened last year, establishing air bases and launching a savage bombing campaign, Obama did nothing. Indeed, he smuglypredicted that Vladimir Putin had entered a quagmire. Some quagmire. Bashar al-Assad’s regime is not only saved. It encircled Aleppo and has seized the upper hand in the civil war. Meanwhile, our hapless secretary of state is running around trying to sue for peace, offering to share intelligence and legitimize Russian intervention if only Putin will promise to conquer gently.

Consider what Putin has achieved. Dealt a very weak hand — a rump Russian state, shorn of empire and saddled with a backward economy and a rusting military — he has restored Russia to great-power status. Reduced to irrelevance in the 1990s, it is now a force to be reckoned with.

In Europe, Putin has unilaterally redrawn the map. His annexation of Crimea will not be reversed. The Europeans are eager to throw off the few sanctions they grudgingly imposed on Russia. And the rape of eastern Ukraine continues.

Ten thousand have already died and now Putin is threatening even more open warfare. Under the absurd pretext of Ukrainian terrorism in Crimea (reminiscent of Hitler’s claim that he invaded Poland in response to a Polish border incursion), Putin has threatened retaliation, massed troops in eight locations on the Ukrainian border, ordered Black Sea naval exercises and moved advanced anti-aircraft batteries into Crimea, giving Moscow control over much of Ukrainian airspace.

And why shouldn’t he? He’s pushing on an open door. Obama still refuses to send Ukraine even defensive weapons. The administration’s response to these provocations? Urging “both sides” to exercise restraint. Both sides, mind you.

And in a gratuitous flaunting of its newly expanded reach, Russia will be conducting joint naval exercises with China in the South China Sea, in obvious support of Beijing’s territorial claims and illegal military bases.

Yet the president shows little concern. He is too smart not to understand geopolitics; he simply doesn’t care. In part because his priorities are domestic. In part because he thinks we lack clean hands and thus the moral standing to continue to play international arbiter.

And in part because he’s convinced that in the long run it doesn’t matter. Fluctuations in great power relations are inherently ephemeral. For a man who sees a moral arc in the universe bending inexorably toward justice, calculations of raw realpolitik are 20th-century thinking — primitive, obsolete, the obsession of small minds.

Obama made all this perfectly clear in speeches at the U.N., in Cairo and here at home in his very first year in office. Two terms later, we see the result. Ukraine dismembered. Eastern Europe on edge. Syria a charnel house. Iran subsuming Iraq. Russia and Iran on the march across the entire northern Middle East.

At the heart of this disorder is a simple asymmetry. It is in worldview. The major revisionist powers — China, Russia and Iran — know what they want: power, territory, tribute. And they’re going after it. Barack Obama takes Ecclesiastes’ view that these are vanities, nothing but vanities.

In the kingdom of heaven, no doubt. Here on earth, however — Aleppo to Donetsk, Estonia to the Spratly Islands — it matters greatly.


Time left until Obama leaves office
Posted by Mladen Andrijasevic at 3:40 AM